"Everyone has secrets and I make it my business to know them."

Wilson started as a simple street dealer working for Jackie. One time he was confronted by a rival gangster Fast Kenny who together with his four henchmen, surrounded Wilson. They begin to shout and threaten him with his life. Meanwhile, Jackie watches the situation from his bulletproof limo.

After listening to Fast Kenny's threats, Wilson says something to him. This causes Kenny to get scared and quickly backs off with his henchmen. From that day, Wilson became one of Jackie's most trusted men and rose quickly to become his second-in-command.

Some time later, rival Bulgarian mob attacks Jackie's headquarters, blowing out the entire twenty-first floor with a ground to air missile. They also hit Jackie's casino, three clubs, a pawn shop and the laundry. After a week not able to contact Jackie, Wilson finally manages to reach him and informs him about the situation.

Together with the entire team, they meet outside their headquarters. They are also met by Carlos Toledo a corrupt cop working for Jackie. He warns Jackie to get on top of this, before Toledo is forced to do something about this or even join with the Bulgarians.

After Jackie allegedly kills fifteen gangster belonging to Valko Balakov's mob and seven female prostitutes, Wilson arranges a meet up between Jackie and the team. Wilson expresses concerns as to what he has done to the mobsters. Jackie explains that it wasn't him that done it, but the Darkness who now operates as an independent entity. Wilson then interrupts them saying that the head of the third biggest mafia clan in Bulgaria, Valko Balakov has just landed. Balakov contacts Jackie and expresses his wish to meet him.

Later, after a failed kidnap of Jackie's family, Wilson stops Jackie from beating to death a kidnapper in front of his family. He then partakes in the interrogation of the kidnappers together with Dean and Jackie. One of the mobsters refuses to reveal Balakov's location, saying that his boss isn't human any more. Estacado then shoots him in the head. After seeing this, Dean decides to leave believing that Jackie has lost it. The second mobster then decides to reveal Balakov's location believing that Jackie is dead either way.

The next day, Wilson is contacted by Jackie, telling him to call the board as the Darkness went rogue. When the team meets they decide to go to Balakov and find out what happened to the Doppelganger. On their way to the cars, Jackie attacks Dean for having a relationship with Jenny. He then decides to leave him behind and take the rest of the team with himself. When they reach Balakov's house, they see a man running out of it and then killed by a tentacle that comes out the doorway. Jackie decides to go in the house alone and tells the team to make sure his family is safe if he doesn't return. Few moments later, Jackie walks out of the house, claiming that they're going home.

When Wilson gets home, he's visited by the Doppelganger. Wilson thinking its Jackie, asks the Doppelganger about Dean and Jenny. The Doppelganger says that he took care of Dean and then reaches out to him with his Darkness tentacles. Before he can infect him, the Doppelganger hears Hope calling for him. He then leaves, but says that he will finish with Wilson later. Horrified by what he saw, Wilson calls Dean, who invites him to come to the office. After what he just witness, Wilson figures that it wasn't Dean on the phone and the Doppelganger isn't Jackie.

Wilson proceeds to arm himself and then travels to meet with Dean. There he finds Hope's former nanny Charlotte, being overwhelmed by the people infected with the Darkness virus. Wilson comes to her rescue and kills few infected making an opening for Charlotte to run away. Before she can run, Dean captures Charlotte. Suddenly, Jackie telepatically orders the infected to release her and walk away. Jackie then continues by saying that he doesn't want to see neither them ever again.

As they leave the city, Charlotte tells Wilson that a while ago, Jackie told her that if it came to it, she should kill him to save Jenny and Hope. After seeing what happened in the city, they both then decide to do just that. The two arrive at the Erewhon and Wilson decides to draw Jackie into daylight, while Charlotte will snipe him from afar. Wilson goes to the house and calls for Jackie. Jackie is surprised to see him and invites Wilson into the house to talk. Wilson refuses, having seen what Jackie can do in the dark and instead tries to lure him out into open.

Although sensing that something isn't right, Jackie complies and walks out of the house. He asks where is Charlotte and Wilson answers that she's okay. Jackie and Wilson then hear a gun go off in the house and the two rush to see what happened. They find Charlotte killed by Hope. Jackie then sends Hope down the stairs and asks Wilson to explain himself. Wilson answers that Jackie is too dangerous for this world and then puts his gun on the ground. He then walks away, saying that if Jackie kills him, Jenny will find out about everything that he done and he will lose her again. As Wilson reaches the stairs, Jackie turns around and kills him with his Darkness tendrils.

Wilson is trusted Jackie's advisor and friend. He relies on intelligence and knowledge to achieve his goals. Thus Wilson makes it his business to know the secrets of those that he works with.

Wilson at Jackie's board meeting.

Wilson nearly getting infected by the Doppelganger.

Wilson fighting with the infected. 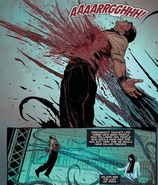 Wilson killed by Jackie.
Add a photo to this gallery
Retrieved from "https://thedarkness.fandom.com/wiki/Wilson_Hammond?oldid=17740"
Community content is available under CC-BY-SA unless otherwise noted.