"It was her way, her vocation being bloody mayhem."

Victoria was a Magdalena during the Second World War. She was tasked in retrieving the Spear of Destiny from Adolf Hitler.

After the Spear of Destiny was acquired by Adolf Hitler, Vatican sent Victoria to retrieve it. On April 13, 1945, Victoria travelled to Berlin and attacked Nazis headquarters. After killing numerous defending Nazis, she confronts Adolf Hitler himself. By using The Light of The Magdalene, Victoria makes Hitler to see all the horrors he has done. As Hitler lies subdued, Victoria spares him, takes the spear and leaves.

Many years later, Victoria's story, how she retrieved the spear was told by Cardinal Innocent to Sister Mariella.

Victoria was courageous woman and a devoted Magdalena of the Vatican. She was known to be a fierce fighter, leaving only mayhem in her path.

Victoria using Light of the Magdalene.

Victoria retrieving the Spear of Destiny. 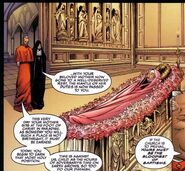 Victoria funeral.
Add a photo to this gallery
Retrieved from "https://thedarkness.fandom.com/wiki/Victoria?oldid=19957"
Community content is available under CC-BY-SA unless otherwise noted.