"I can do everything faster than everybody else. Why's that put a target on my back?"

Velocity (Carin Taylor) is a member of the Cyberforce team appearing in the Unholy Union crossover comic.

Velocity repairs a shuttle with the help of Ballistic. She expresses her displeasure of always having to fix everything because she can do it faster than anyone else. Unaware the Angelus flies towards her and in order to posses her.

At one point, Carin became the host of the Angelus but was driven out by fellow Cyberforce team member Cyblade using her energy blade ability. Carin does not remember the incident, but was able to recall that something bad was about to happen. 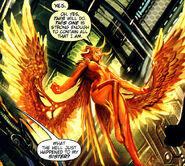 Velocity (Carin Taylor) as the host for the Angelus.
Add a photo to this gallery
Retrieved from "https://thedarkness.fandom.com/wiki/Velocity?oldid=16785"
Community content is available under CC-BY-SA unless otherwise noted.