"I learned a long time ago you can't save men like Jackie, they just want you to think you can. It's all very s&m when you think about it, so I try not to."

Vampirella is a superheroic vampire whom both the Magdalena and Jackie Estacado have encountered and worked with. She met Patience while they were both hunting a symbiotic vampire trying to steal the Darkness from Jackie.

Vampirella was tracking a symbiotic vampire in hiding at a mental hospital, nicknamed the Swarm. She encountered the Magdalena Patience during that time and they began working together to capture, question, and kill the Vampire. At some point, they realized what he was after: the Darkness.

Vampirella tracked Jackie down to where he was relaxing at an Italian dinner called Enrico's. She kept watch of him, while at the same time he kept watch of her. After he left, Vampirella fallowed him until he grabbed her and restrained her in an ally. She bit his hand and freed herself, though she also commented that his blood was foul and tasted "like Hell" (due to the garlic from his dinner). She explained about the Vampire that was after him, though he mostly ignored this. She then kicked Jackie in his groin and left.

As Jackie was killing a mobster, Vampirella kept watch while sitting on the hood of his car. She then followed him to a strip club, called Rick's Southside. There she sensed the Vampire and jumped on stage and seduced he Vampire before kicking him in the face. The vampire shrugged off the attack and tossed Vampirella halfway across the club and right onto Jackie.

As Jackie summoned the Darkness to kill the vampire, Vampirella made her way out of the club and onto the roof of a nearby building. She and Patience watched in the shadows as Jackie left the club, during which time she recalled how he felt he was a scared child that she could have helped, though she simply pushed this to the back of her mind as Jackie walked off.

Vampirella is immune to many of the inherent weaknesses of Vampires except for the following: 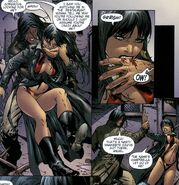 Vampirella kicking Jackie in the crotch. 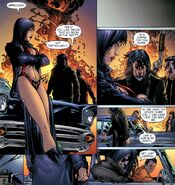 Vampirella commenting on Jackie's skills after he takes out Big Mickey.

The Swarm throwing Vampirella at Jackie.

Vampirella watching Jackie from the rooftops.
Add a photo to this gallery
Retrieved from "https://thedarkness.fandom.com/wiki/Vampirella?oldid=20269"
Community content is available under CC-BY-SA unless otherwise noted.