Tomas was hired as a personal bodyguard for Jackie Estacado. Together with Hector they ensured safety for both Jackie and Professor Kirchner. They also were responsible for crowd control, when Jackie would come out during daylight to meet the people of Sierra Muñoz.

As he isn't seen from this point on it's implied that Tomas either was killed or he escaped before Professor Kirchner lost his life.

Until he got paid, Tomas was a loyal bodyguard for Jackie. He quickly agreed to kill Jackie for Professor Kirchner in order to become the new leader of Sierra Muñoz. 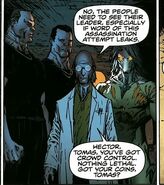 Tomas alongside Jackie and Professor Kirchner

Tomas opening the doors for Jackie 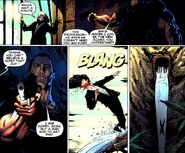 Tomas shooting Jackie
Add a photo to this gallery
Retrieved from "https://thedarkness.fandom.com/wiki/Tomas?oldid=12035"
Community content is available under CC-BY-SA unless otherwise noted.