The Family is the third chapter of The Darkness II.

When Jackie returns to his mansion with Vinnie, they discusses the attack on Mama Lucchesi's. Vinnie mentions again, that he saw a weird limp guy, who seemingly vanished in front of him. He adds, that Jimmy the Grape does have a lead about the crew who hit them. Jackie tells Vinnie that he will meet Jimmy in his office and heads upstairs. Jackie also meets up with his enforcers and friends and talks with his servants.

When he reaches his bedroom, Jackie lights up a candle near the picture of Jenny. Jackie recalls how he saw an apparition of Jenny in alleyway and on the tracks in the subway station. Aunt Sarah then approaches him, saying that Jackie tortures himself with her memory and he should let it go and move on with his life. She also expresses her fear, that Jackie acts just like his father, Carlo, who could never let things go. Jackie dismisses this, claiming that he's fine, but Sarah doesn't believe him. She tells Jackie to come and talk with her later in her bedroom, if he ever gets the balls to talk about this issue.

Jackie then meets up with Vinnie in the atrium. He orders Vinnie to locate and bring Johnny Powell to the mansion who lives down by the Queensboro Bridge. Vinnie tells Jackie that he will give this task to the new guys. Jackie then heads to his office and meets with Jimmy. Jimmy is happy to see Jackie still alive. He reveals, that soon after the restaurant attack, somebody torched their warehouse and wounded two of their enforcers. Jimmy believes, that somebody is trying to push them out of business and that somebody might be Swifty. Jackie recalls seeing Swifty leave the restaurant just as he arrived. After gathering his crew, Jackie decides to pay Swifty a visit. 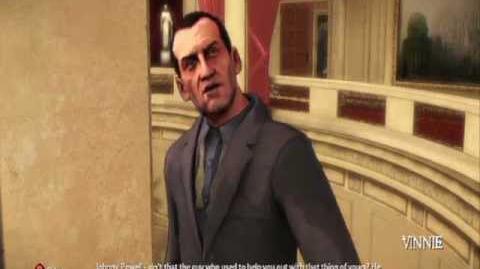 The Darkness 2 Walkthrough Part 4
Add a photo to this gallery
Retrieved from "https://thedarkness.fandom.com/wiki/The_Family?oldid=20275"
Community content is available under CC-BY-SA unless otherwise noted.