The Spear of Destiny is one of the Thirteen Artifacts and was once used by the Roman Longinus to pierce the side of Jesus Christ as He hung on the cross. The Spear has the power of foresight and wielding it, one can channel their power through it and destroy demons and beings of a magical nature.

The Roman Centurion Longinus used The Spear to pierce the side of Jesus Christ as He hung upon the cross. There is no record of the weapon prior to the crucifixion. But Christ's bloodline did not end upon Calvary. A daughter was born from His union with Mary Magdalene. Since then, a daughter has been born in every generation down through the centuries.

In 1945, during the Second World War, Adolf Hitler, leader of The Nazis, acquired and intended to use The Spear to bring Germany to absolute victory over the world. While making their base in the ruins of Berlin, Sister Victoria battled her way in to The Nazi's base, slaughtering German soldiers in her wake. Upon reaching Hitler, she used The Light of Magdalene and left Hitler to commit suicide as a wave of guilt washed over him. She obtained The Spear and returned it to The Vatican.

In the late 90's, Sister Mariella was sent by Cardinal Innocent on an assassination mission to kill the latest host of The Darkness, Jackie Estacado. Though she was rushed to her mantle and did not know reality from spirituality. During her confrontation with Jackie, he shattered The Spear. The tip of the spear fell into a portable hospital bed that was hauling a wounded prostitute. The bed was then used for Appolonia Franchetti, who managed to use The Spear to tap into the essence of Darkness that Jackie unknowingly planted within her. Appolonia left the head of the spear when she escaped, Mariella having what she came for, returned to Vatican.

When Mariella had died and the new Magdalena, named Patience, was chosen, she was given a task to repair the Spear of Destiny. She accidentally cut herself with a piece of the spear and then she realized that her blood was the key in repairing the Spear of Destiny. When asked to return the now repaired spear, Patience refused, saying that it is part of her now. When Patience met Lara Croft and defected from Vatican, she took the spear along with her. Patience used the Spear of Destiny to destroy the forces she was fighting, while chasing the artifact known as Rapture. It was also then, that the Spear of Destiny reacted to Rapture magic and unknown force was unleashed from the spear. Patience then used the spear to prevent a magician to get his hands on Rapture. Patience had turned her back upon the Church, but retains the spear in her crusade against evil.

The spear bestows its wielder the power to destroy any magical creature, no matter how powerful it is. It can also heal the wounds of its wielder as shown when the spear healed Appolonia. As the name implies it also grants the wielder the power of choice. In that whosoever wields has the power to decide how to use the spear and for what purposes; if a handler chooses to take up it's mantle for the side of good, then they will be afforded power over light and order similar to the Angelus. If they decide to use the mighty lance's powers for evil intent then they are instead gifted with dark and malfeasance abilities based upon the Darkness.

Victoria retrieving the spear from Hitler. 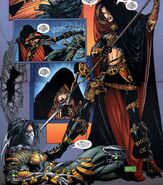 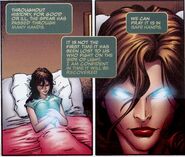 Appolonia being healed by the spear.

The spear turning Appolonia into the "Dark Queen". 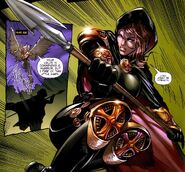 Patience wielding the spear.
Add a photo to this gallery
Retrieved from "https://thedarkness.fandom.com/wiki/Spear_of_Destiny_(Comics)?oldid=20107"
Community content is available under CC-BY-SA unless otherwise noted.