"Men call me the Sovereign."

– The Sovereign to Jackie. [src]

The soul-collector known as the Sovereign was an auditor for Hell. Once a depraved Caesar of Rome, the Sovereign was slain by a wielder of the Darkness. Although he was damned to Hell, he deceived an angel into freeing him; pledging his allegiance to Hell in exchange for revenge.

Long ago, Sovereign ruled an eclipsing kingdom where his subjects feared and respected him so that they dared not speak his name, addressing him only as "The Sovereign". His domain possessed a scope and strength unrivaled by others because he understood that truly lasting power came from knowledge. To that end, the Sovereign sent emissaries throughout the lands with an insoluble riddle to challenge the minds of all those who thought themselves clever enough to solve it. Those that did solve the riddle were rewarded with abduction and brought to stand beside the Sovereign as his captive council.

In just few short months, Sovereign's kingdom saw advances on all social and technological fronts. The Sovereign's greed for power through knowledge was insatiable and as such he allowed himself to be seduced by a divinely beautiful woman from Persia, wise beyond her years, who managed to solve Sovereign's riddle with ease. She was the daughter of the Persia king's concubine and when he find out about the affair, he threatened the Sovereign with war. As the Sovereign refused to free his daughter, the king sent an army of mercenaries led by a Darkness wielder, Naram-Sin.

When they arrived at the border, Naram-Sin's mercenary army were destroyed and he himself captured without conflict. The Sovereign and his council stripped Naram-Sin of his armour, which was believed to be the source of his power. However beneath his earthly covering laid the true source of his power, a second armour made out of the Darkness. Intrigued by the power Naram-Sin commanded, the Sovereign pried the Darkness armour and fixed it to himself. The armour then grew and lashed the Sovereign to a column in the middle of his court where he was forced to watch helplessly as Naram-Sin's Darklings kill everyone in his council and destroyed his city. Naram-Sin then proceed to kill the Sovereign himself.

Disposed to serve in the afterlife, the Sovereign soon grew powerful and became a judge of sinners in Hell. As a reward for his service he was granted the power to project his awareness into those effigies of himself which still existed on Earth. Able to return to Earth, Sovereign started to accumulate vast amounts of resources in order to take a revenge on the the Darkness wielders. Over the course of the several centuries, the Sovereign observes multiple Darkness wielders.

After Jackie Estacado leaves Sierra Muñoz, the Sovereign hires Aphrodite IV in order to capture him. After being hired, she stalked Jackie, monitoring his activities. She points out to Sovereign that Jackie's health has been diminishing since he returned to the states. Aphrodite IV asks Sovereign if she should take him now and the latter suggests to wait and see where he will go.

Eventually, Aphrodite IV follows Jackie to a remote farm, where he fights with a group of gangsters and manages to capture him. Jackie is brought to an empty hospital were Sovereign confronts him. He deceits Jackie into believing that he has died and the Sovereign has his soul. If Jackie wants to get it back, he will need to work for the Sovereign and capture various souls that have been released from Hell by him. Jackie agrees and Sovereign reveals the first hit, Sister Johanna of the Order of the Agonized Heart of Christ. Although to the outside world, Sister Johanna is an unparalleled humanitarian in reality she's possessed by the demon that the Sovereign freed from hell. Jackie complies and kills the demon possessing Sister Johanna.

The Sovereign then sent Jackie to rescind Troy Raymer's immortality. He eventually tracks him down to Open Creek and forces to rescind his immortality and become mortal again. After that the Sovereign sent Jackie to kill a Canadian Frontiersman who inhabited a ten year old kid's body in Burundi, Mwaro province. After murdering him, Jackie travels to Cario, Egypt to meet with Sovereign. Murdering the ten year old shocks Jackie and he decides to quit. The Sovereign instead decides to give him a short break, but expects him in New York by Christmas for his next assignment. Jackie then proceeds to destroy the Sovereign's statue with a shovel.

After Jackie fails to check in, the Sovereign hires a team of mercenaries as a precaution if he decides to attack him. As expected Jackie attacks a compound owned by the Sovereign. Jackie begins to slaughter the team and the teams leader, Lockhart calls the Sovereign asking him to activate the sunburst protocol. The Sovereign does this, causing ultra violet light to turn on in the room. This disable Jackie's powers and leaves him powerless. The Sovereign himself then appears and mocks him. Jackie asks him why did he lied to him to which Sovereign answers that he enjoys tormenting his kind. Long ago, The Darkness took everything from him and the Sovereign was bound to the idols made in his image.

The Sovereign then claims that Jackie will live the remainder of his harsh live under these lights. Jackie then proceeds to shatter the Sovereign from inside, take the gun from Leonard Kim and shoot out the lights. He then unleashes his Darklings on the remaining mercenaries. Jackie then finds a room full of the Sovereign statues and proceeds to fight them. In order to weaken him, Sovereign activates the ultra violet lights in the room. Meanwhile, the Darklings find and disable electricity in the compound. Seeing that he's at a disadvantage, the Sovereign leaves.

Jackie then gathered a team in order to find and destroy all of the Sovereign statues. Colborne an oil baron, is informed that his henchman Deckard has lost his ops team while they were trying to apprehend Candace Cypress just like his field geologist he sent earlier. Sovereign suggests Colborne to send Scab in order to secure the swamp as he is already in Miami. Colborne is reluctant, thinking that its a bit overboard to send him to capture Candace. Sovereign answers that if the competition turns out to be who he thinks it is, Scab will be invaluable. He finishes by saying that the swamp will their no matter the cost.

Over the next few months, Jackie's team manages to destroy sixty percent of the Sovereign statues in the world. The team then steals another statue from Fort Knox which was retrieved by American army from late Saddam Hussein. As the team drives away with the stolen statue, The Sovereign contacts them through it. The team want to destroy the statue, but Dev Ravada first wants to hear his proposition. Sovereign wants the team to walk away and let this be settled between Estacado and him. In return the Sovereign will double their payment. Leonard Kim isn't convinced, having heard how he manipulates and double crosses others for his own agenda. Kim and Vike then attack the Sovereign, but are quickly knocked out. Leonard then reveals to have attached a C-4 to the Sovereign's back. He quickly tells Kash O'Neal to stop the van, forcing Sovereign to fly through the front windshield. Kim then activates the explosives and destroys the statue. Another statue is then retrieved from a human trafficker turned art collector, Vasily Martynov.

Weeks later, Jackie and his team travel to Egypt to find the last Sovereign's statues. Kim, Vike and Kash take out the small militia defending the Sovereign's temple. Then they are attacked by an army of The Sovereign stone statues. The team is overwhelmed, but Jackie quickly destroys the army by using his Darkness powers. As the team inhale dust from the destroyed statues they lose conciousness and get trapped in a illusion. Kim sees mountains of gold, Vike fights with the Sovereign one on one and Kash sees a private island only for her. Understanding that the Sovereign wants to fight only him, Jackie sends his Darklings to take the team to safety. He then goes into the temple and searches for the last statue. Jackie finds the temple empty when suddenly a giant Sovereign statue emerges from below the temple.

Jackie and the Sovereign battle each other. After a tough fight, Jackie shatters the statue. From the remains another Sovereign's statue emerges. Made from a meteorite, the statue radiated both light and deadly amounts of radiation. This quickly incapacitates Jackie and begins to slowly burn his flesh. As Jackie collapses thinking that he has lost, Kim jumps in and shatters the Sovereign's statue.

Having lost his family, his empire, and his very life and body to a wielder of the Darkness, the Sovereign was wholly obsessed with enacting his vengeance upon any and all men cursed by the power. To this end, he devoted all of his resources into manipulating events against them.

Ironically, over the course of several centuries as he observed individual Darkness wielders across many generations, he grew to respect their prowess and ferocity. He once stated to Aphrodite IX that there were no warriors under Heaven more fearsome than bearers of the Darkness.

The Sovereign as human.

The Sovereign looking at a painting. 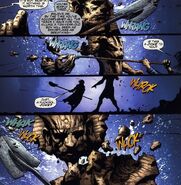 A room filled with the Sovereign's statues.

The Sovereign's statue in London museum. 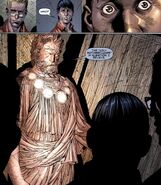 The Sovereign talking to Jackie's team. 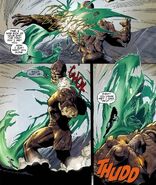 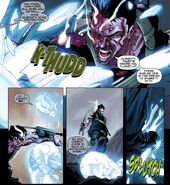 Kim destroying Sovereign's last statue.
Add a photo to this gallery
Retrieved from "https://thedarkness.fandom.com/wiki/Sovereign?oldid=19515"
Community content is available under CC-BY-SA unless otherwise noted.