"Goodbye, my sweet Lord of Darkness. May you find in death the peace you never knew in life."

Sela The Fox is an undercover Earth government agent appearing in Tales of The Darkness: Issue 1 and 2.

Sela the first officer of deep space cargo freighter Runners Gold boards with a Darkness vessel. A Darkness Foot-Creature, which presence terrifies her. The captain of the freighter Fincher lets the creature to look a the offering they have to the Dark Prince so they could be given a safe passage through the system. Instead the creature goes deeper into the freighter much to Fincher's objections.

The Darkness Foot-Creature expresses that it wants Captain Fincher to open the secondary compartment hold. Fincher declares that he can't open the hold, because it carries a dangerous bioconttaminent that must not be exposed to the rest of the ship. The Darkness Foot-Creature break through the hold anyway, revealing it to be carrying forbidden light generating grenades. Suddenly, Fincher opens up the door to space and flushes out the Darkness Foot-Creature out of the freighter. Sela questions Fincher decision, saying that he just signed a death warrant for all of them. Fincher thinks otherwise, revealing that they still can escape if they get Runners Gold into warp.

Harvester attacks the freighter and begins to consume all the crew. Sela confronts the creature demanding an audience with Darkness otherwise she will activated all the grenades in the freighter killing everyone, including the Dark Prince.

Aboard the Darkness Vessel Edit

Later, Sela reveals to be an agent that together with Fincher fabricated the whole smuggler story and were trying to get access to the Darkness vessel. She contacts her superiors that the mission was successful. Sela asks who her contact is on the ship to which they respond that the identity of the contact will remain unknown until the moment of contact.

Suddenly, the Dark Prince confronts her and asks her to walk with him. Then they go for a swim with Sela putting an environmental suit and the Prince shedding his armour. They enjoy quite time in the water until Vassal sends a creature to attack them. Dark Prince quickly kills it and they return back to the vessel. The Vassal then takes Sela to wedding suit were she spends the night. That night Sela dreams of her mother, which is revealed to be Gilandra.

The next day, the Darkness vessel approaches the Dyson Sphere, an artificial planet made by a man where sun never sets. Sela has doubts about her mission to lure the Dark Prince into the sphere and kill him there. She brushes off her indecisions and decides to accomplish her mission.

Tthe Dark Prince asks if Sela slept well to which she answers that she did. Vassal interrupts them and she has a word with the Prince. Sela in the meantime, explores the vessel only to be confronted by a Darkness foot-creature. She tries to pass him, but the creature doesn't let her. Then a swarm of Darkness creatures attacks her. Sela then throws a mini solar grenade and vanquishes the creatures. She then continues her journey deeper into the vessel. Suddenly, zombified Captain Fincher attacks Sela, screaming that the Vassal knows everything about their plan and that she must get out of here now.

Later, Sela meets with the Dark Prince who expresses that he wants her to become his mate as they look into space. She then checks her crew in the detention area. Sela immediately notices that they're not acting normal. She is met by Attionette Rodriguez who begins to praise the Darkness. Suddenly Rodriguez reveals to be in reality Vassal. Sela screams at Vassal to leave her mind alone. Vassal instead turns into her mother Gilandra. She surprised when Sela calls her mother, expressing that she doesn't like surprises. Sela than attacks her, but Vassal knocks her out with one punch. Vassal then says that she would never let anyone to come in between her and the Dark Prince. She then reveals that her Darkness creatures already sent to destroy the Dyson Sphere and everyone in it. As Sela gets contact from her superiors, she hears as the sphere is attacked by the Darkness vessel and its creatures.

Sela then meets with the Dark Prince and accuses Vassal of treachery. She then shows her what he did to Gilandra, making the Prince to become furious with Vassal. Vassal quickly casts an illusion making the Prince believe Sela to be the enemy. Then suddenly, Gilandra appears behind Vassal, breaking the mindlock on the Dark Prince. The Prince hugs Sela and expresses love to her. Gilandra then urges them to run away until she can still hold Vassal. Reluctant, Sela and the Dark Prince escape. As they escape, Vassal overpowers Gilandra, saying that she will consume her and her daughters soul.

Meanwhile, the Dark Prince and Sela enjoy sunrise. As the sunlight touches him, the Dark Prince turns into dust, much to Sela's horror. She then leaves the planet to inform her superiors of successful mission.

Sela is brave and bold woman that would go great lengths to accomplish her missions. She also felt lonely and tired of pretending to be someone else. Sela hated and despised the Dark Prince for killing her mother. Although this change when she got to know the Prince in person, slowly falling in love with him. After the Dark Prince dies, Sela expresses grief over her lovers death.

Sela was really close to her mother and thought very highly about her. After her mothers death, she missed her very much.

Sela spending time together with the Prince

Vassal casting an illusion on Sela 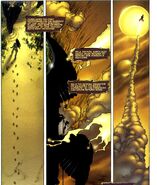 Sela flying away
Add a photo to this gallery
Retrieved from "https://thedarkness.fandom.com/wiki/Sela_the_Fox?oldid=12585"
Community content is available under CC-BY-SA unless otherwise noted.