Sancho Pansa is Cervantes manservant appearing in Tales of The Darkness: Issue 3 and 4.

At some point, Sancho Pansa became a loyal manservant to Cervantes and together they wandered the world.

Cervantes and his trusty side-kick Sancho Pansa wandered the plains of La Mancha. They came across a small village where Cervantes stops a woman from beating her serving girl Bernadette for sleeping with a gypsy boy. Cervantes then asks for a place to sleep, but all rooms are reserved for Papal delegation. After some persuasion from Sancho, the women lets them sleep in the stables.

The men relax in the stables, when Cervantes notices someone else in the stables with them. He calls him out to show himself. Suddenly, a man falls through the roof. Cervantes quickly subdues him and asks him to give him one reason why he shouldn't slit his throat. The man reveals to be Michaelangelo Estacado.

The Story of Michaelangelo Edit

Cervantes holding Michaelangelo Estacado by his throat. Sancho suggests killing him, while Michaelangelo instead suggests listening to his story, which might change their mind about him.

Michaelangelo was born to a gypsy woman Donatella Estacado and unknown father that he neither of them new the identity. When he was still a boy his mother was accused of Witchcraft after refusing the sexual advance of a young ship captain in service to the Spanish crown. She was taken before an inquisitor and sentenced to burn at the stake. She swore revenge before dying that her son would avenge her.

Michaelangelo, being Donatella's son, was believed to be The Devil's bastard son and so a Witchhunt was set out for him as well. Some of his mother's Gypsy friends had arranged for Michaelangelo to escape The Inquisition and take flight across the Andelusian plains and mountains, to find a safe place where no one knew Michaelangelo and where he would live in peace with the Gypsies.

He was welcomed and during his stay and learned a little about The Darkness from one of the psychic Gypsy elders, Mother Maria.

Cervantes is intrigue by the story, while Sancho distrusts Michaelangelo, thinking that he's story is just lies. Then suddenly, inquisition comes to the village. The man suggest Michaelangelo to leave the La Mancha while he still can. His talk is interrupted by the inquisition taking the girl with which he slept. The inquisition reveals they found out from the girl that the gypsy boy they're looking for was here. The landlady confirms their suspicions.

The Arrival of Inquisition Edit

Meanwhile, in the stables, Cervantes urges Michaelangelo to leave as he can't do anything for the girl. As Michaelangelo prepares to leave, Sancho accidentally alerts the inquisition about their presence. The inquisition take them to their leader, which turns out to be Sonatine.

Cervantes gets private audience with Sonatine, where he reveals that celestial forces are present in La Mancha, while Sancho is guarded by Inquisition. He later learns about Michaelangelo killing of the Inquisition and awakening the Darkness.

Sancho Pansa optimistic view of the world, taking enjoyment even in the smallest good things that happen to him. His mind is always with fulfilling earthly needs like a shelter or a good meal. Although he often judges other people based on superstition. For example, Sancho immediately distrusted Michaelangelo only because he was a gypsy. 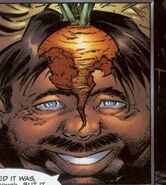 Sancho caught by the Inquisition.
Add a photo to this gallery
Retrieved from "https://thedarkness.fandom.com/wiki/Sancho_Pansa?oldid=16852"
Community content is available under CC-BY-SA unless otherwise noted.