"Everyone he knows, everyone he touches is poisoned by him and I'm afraid... I'm very afraid that the poison will keep spreading until it touches everything and everyone. Even you."

Visit from Jenny and Hope Edit

After Jenny sees Hope's rotting arm, she takes her to their family doctor, Rosemary Wallace. When she shows Hope's infected arm, the doctor only sees the scratch from the cat. In order to calm Jenny down, the doctor prescribes antibiotics for Hope.

Later, Dr. Wallace is called to Erewhon in order to take a blood sample from Hope. She also checks the mental health of Jenny as this is the real reason why Jackie called her. The doctor reveals to Jackie that Jenny seems to be suffering from some short of dementia.

The next day, Dr. Wallace gets the Hope's blood sample results, which reveal that she has some kind of disease. She then quickly calls Jackie and informs him about this, but he doesn't the doctor. The doctor then decides to record an audio tape in which she tells, that whatever disease Hope got came from Jackie and eventually he will spread it to everyone else on Earth. Dr. Wallace then notices a rotting crack in her house wall, similar to the same on in Erewhon.

Dr. Wallace being visited by Jenny and Hope 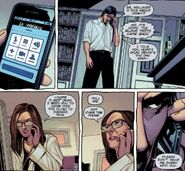 Dr. Wallace calling Jackie
Add a photo to this gallery
Retrieved from "https://thedarkness.fandom.com/wiki/Rosemary_Wallace?oldid=15500"
Community content is available under CC-BY-SA unless otherwise noted.