The Darkness Wiki
Register
Don't have an account?
Sign In
Advertisement
in: Comics Characters, Human, Darkness Host,
and 5 more
English

"You go to whoever calls you, considerin' you've done "work" for both sides. You'd blown yer own mother's head off if ya could make a nickel off it."

Roberto Estacado was an independent gun-for-hire and a previous wielder of the Darkness from in and around the 1940's. He is the late husband of Adrienne Estacado and the father of Danny Estacado, making him the grandfather of both Jackie Estacado and his twin Capris Castiglione.

Roberto was born to unnamed Darkness host. After his 21st birthday, Roberto awakened his Darkness powers and used them to become the top assassin in the world.

In 1942 he was hired to kill a French resistance member, named Logan. Roberto finds the man in a local bar, celebrating together with his buddies from resistance. As he enters the bar, he tells the bar keeper to buy Logan whatever he is drinking and then everyone else must leave immediately. Estelle decides to pull out a gun, but Logan stops her and she then proceeds to leave the bar.

Roberto then introduces himself to Logan, but the latter already knows that he's here to kill him. Logan tells, that Roberto is rated as the top assassin in the world by most organizations. And that's mainly because, Roberto doesn't just wipe out targets, but also wipe outs entire towns. Especially when it isn't necessary. Meanwhile, Roberto doesn't know anything about Logan, except that he showed up one day and suddenly the French resistance became a far greater thorn in Germany's side than ever before.

Although Roberto isn't sure if Logan is working for the Allies or just for himself, the Third Reich has hired him to eliminate the Wolverine. Logan points out that Roberto goes to whoever calls him as he has done "work" for both sides. Roberto then offers to have drink together, before they begin their "game". Logan rejects this offer, saying that he doesn't drink with murdering scumbags and then leaves the bar. When Roberto realizes this, he begins hunting him.

Roberto manages to track down Logan and gets inside a church's tower where he prepares his rifle. Dante, Roberto's Darkling, warns him, that something is different about Logan and he has seen those eyes before. Roberto ignores Dante's worries and loads his rifle with a Darkness bullet. Dante then notices Logan talking with an SS officer.

As Roberto shoots his bullet, Logan grabs the officer and uses him as a shield. After hitting the officer, a Darkness wyrm erupts through the man's chest. Roberto then takes another shot, but this time, Logan catches the bullet with his bare hand. Roberto is impressed with Logan's skills and then turns his bullet into another Darkness wyrm. The wyrm then bites Logan's hand, much to his surprise. Logan then uses his boneclaws to cut the creature in half.

With the wyrm dead, Logan goes after Roberto. Roberto doesn't worry about this and waits in anticipation when he will be able to teach the Wolverine to be afraid of the dark.

As Logan confronts Roberto in the church, he figures out that the light is his weakness and by using his nightvision, hes able to locate a light switch, making Roberto powerless. Logan then cuts off left arm and leg. As Roberto lays on the ground, he spits at Logan, who then proceeds to stab him with his bone claws. Believing Roberto to be dead, Logan walks away. Dante then grabs Roberto and pulls him under the bed to repair his wounds. He then swears it, that no matter how long it takes, he will kill Logan.

At some point afterwards, Roberto married Adrienne Estacado, who knew of his Darkness powers. They were in love and had fun with the Darkness by robbing banks together. Once Adrienne got pregnant with Danny, Roberto lost his powers and was killed by the cops. Meanwhile Adrienne who was also caught in the crossfire were kept alive by the Darkness in order to save its future host.

Roberto was a sadistic psychopath that cared little about others besides himself. He would often wipe out entire towns full of innocents just so to reach his targets, especially when that wasn't necessary. Money seemed to be the driving force behind Roberto's motives and thus he didn't care from whom he took the jobs or what he needed to kill as long as he was paid in the end.

"Well, last I heard, most organizations have ya rated as the top assassin in the world. And that's mainly 'cause ya don't wipe out targets, ya wipe out towns. Especially when it ain't necessary."

Roberto finding Logan in a bar. 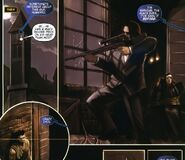 Roberto aiming his rifle at Logan. 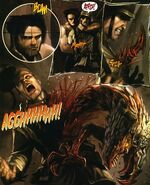 Darkness bullet missing Logan and turning into a wyrm. 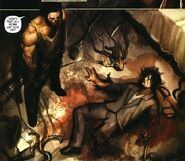 Roberto after the battle with Logan. 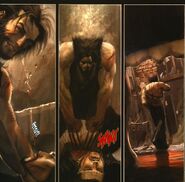 Dante dragging Roberto's body under the bed in order to heal his wounds.
Deutsch
Community content is available under CC-BY-SA unless otherwise noted.