The Realm of the Darkness was an unspecified otherworld supposedly created by the Darkness. It was ruled by the Heart of Darkness and served as a purgatorial afterlife both for the souls of fallen Darkness wielders as well as their victims and enemies - fighting for all eternity.

After years containing the Darkness in himself, the Heart of Darkness couldn't bare the pain any longer and decided to cast away a small portion of this power. Once cast away, the Darkness grew around him, until he was trapped in the bowels of the Realm of the Darkness.

Over the next few thousands years, numerous worlds were created inside the Darkness, which housed all the souls accumulated by the entity.

When the current host, Jackie Estacado, decided to find and kill the Darkness, he travelled to the Realm of the Darkness. He first entered a vast jungle, that divided by a giant mountain. The jungle was inhabited by primitive looking humans, that were under the rule of a former Darkness wielder.

Jackie eventually defeats the Jungle King and climbs the mountain, reaching the other side of the realm. There two rivalling factions, Black Guidon and Green Pennant, were waging an endless war for dominance. After each battle, a giant maw would open in the middle of the battlefield, consuming fallen soldiers and then bringing back fallen Darkness wielders to continue their fight.

After passing through the maw, Jackie then reaches a Darkness version of New Jersey, filled with rival mobs fighting for the control of the city.

In the end, after Jackie defeats Heart of Darkness, the Realm of the Darkness is purified by the light.

The mountain dividing the jungle.

The battlefield and the maw. 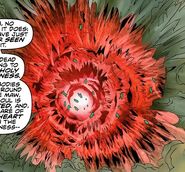 The maw from above. 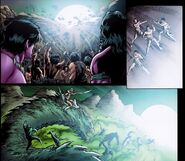 The realm purified by light.
Add a photo to this gallery
Retrieved from "https://thedarkness.fandom.com/wiki/Realm_of_the_Darkness?oldid=18371"
Community content is available under CC-BY-SA unless otherwise noted.