"I should slit your throat and fuck the hole."

The gunslinger Ramon Estacado was an ancestor of Jackie Estacado and a wielder of the Darkness during the 1800’s. An outlaw of the Southwestern United States, Ramon spent his life trafficking with roughnecks and dealing in illicit affairs of both the mundane and the supernatural.

Little was revealed of Ramon's past beyond that he was born the son of a prostitute after his father - an Estacado and Darkness wielder - died passing the curse on to him at the moment of conception. It wasn't shown if he was born legitimately or simply took his father's surname.

His father, according to him, was a cruel man who beat and nearly strangled his mother to death before he was even born. Ramon's childhood is likewise ambiguous, although it was almost certainly a demoralizing and unprincipled experience; being the son of a whore and a womanizer.

Dubiously, Ramon described himself as being kind in his childhood. If this is true, it would indicate either that he was good-natured as a boy and became troubled over time or that his mother or other parental figures put forth a genuine effort to raise him but ultimately failed.

Some time later, Ramon formed his own gang with which he ravaged the West. At some point they stole an ancient artifact known as the Blood Pearl. Suspecting that it might be cursed, Ramon insisted the gang to keep the artifact and not sell it, and then leaves the gang.

While ravaging a town, he's captured by the towns denizens and sentenced to be hanged. He manages to buy enough time until sun disappears. As the darkness comes, Ramon activates his powers, scaring the denizens away. The towns sheriff hits the horse on which Ramon sits causing him to get hanged. His powers protect him from death, but the sheriff orders Ramon to never set foot in the town again. Ramon then knocks the sheriff out and leaves him alive just because he needs to catch a train.

The train in question, The Rocky Mountain Special is carrying a couple millions in federal dollars and gold. With a gang consisting of Darklings, Ramon attacks the train. After taking care off the guards, Ramon gets inside and fights a group of Pinkerton agents. Ramon kills all, but one agent and then asks the survivor if there're any more traps in the train. As he asks this question, the Pinkerton agent crawls to the trap and activates it, exploding the train. After Surviving the explosion, Ramon is confronted by his old gang led by his former friend Clem who have been turned into demons by the Blood Pearl. Clem and his former gang exact revenge on Ramon by beating him up, throw him into a ditch and then stealing all the gold. Clem with the gang then went to a local town and started to ravage it.

In the morning, Ramon wakes up and tracks down his old gang to the same town, he was forced to leave by its sheriff. He finds the town ravaged and calls Clem out to fight, believing that his powers won't work in daylight. Unfortunately, Clem's powers do work in daylight and he proceeds to attack Ramon. Ramon then realises that it's the Blood Pearl that gives them this power. He snatches the pearl from Clem and breaks it, turning all his former crewmen back to humans. Ramon then kills Clem and offers the rest of the gang to join him as they go to continue ravaging the town with him.

As charismatic as he was conniving, Ramon was a hardened outlaw of the West; perpetually driven to steal and kill. Calloused and cruel, Ramon put himself first above any other; even casually burning down a whole town full of women and children with his gang just to relax himself.

Ramon inherited many of his father's brutalities. Like him, he was a womanizer who blatantly misused women; even casually casting one aside who was only embracing him in gratitude for killing one of his former crewmen who had tried to rape her; only to rape and kill them himself.

"The sun ain't got no power over me. The darkness does, though."

– Ramon to his executioners. [src] 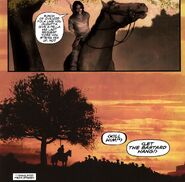 Ramon sentenced to be hanged. 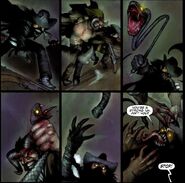 Ramon overwhelmed by his former gang.

Ramon laying in a ditch.

Ramon killing Clem.
Add a photo to this gallery
Retrieved from "https://thedarkness.fandom.com/wiki/Ramon_Estacado?oldid=20073"
Community content is available under CC-BY-SA unless otherwise noted.