– Kirchner to Jackie after seeing his Darkness powers. [src]

Professor Kirchner was a mysterious and brilliant professor of chemical engineering who appears in The Darkness comics series.

Kirchner was involved in betting baseball and football games with crime families such as the Mattottis and the Ukrainians. Jackie Estacado was assigned to kill after he was unable to pay his baseball betting debts to local mobsters.

During their first encounter, Kirchner witnessed Jackie use The Darkness to kill members of the Mattotti crime family who were assaulting the building. With his last request he asked Jackie if he could study The Darkness to which Jackie agreed. With Kirchner's guidance, Jackie was able to refine his powers, create the Nightfall drug, take over Sierra Munoz, and create Elle.

After Jackie survives an assassination attempt by the rebels, Kirchner comes to check on him accompanied by Tomas and Hector. Kirchner asks where his head of security, Colonel Sampayo is right now, and Jackie answers that he probably left the mansion. Kirchner tells that he will send men to track him down and asks Jackie if all attackers have been killed to which Jackie lies that they did.

Kirchner then informs Jackie that their drug pusher Caprio is waiting at the cathedral with a possible buyer from Miami. They decides to walk through streets and meet the people. As they go outside, the crowd greets Jackie and his henchmen throw money at them.

At the cathedral, Jackie and Kirchner meet with Caprio and his buyer from Miami, Gerry Kiffin. They enter the cathedral and Caprio introduces Gerry to the new synthetic drug called Nightfall. Created from Darkness by Kirchner, the drug induces incredible sense of pleasure while not being physically addictive. Although the person won't be able to stop thinking and wanting the drug. By using this drug, Jackie and Kirchner were able to take the Sierra Muñoz from their previous leaders. After some convincing from Caprio, Gerry finally decides to buy a shipment of Nightfall.

As Gerry leaves to Caprio goes and talks with Kirchner eye to eye. He reveals knowing that Ocaso is actually Jackie Estacado and that Kirchner has been tweaking the Nightfall, making it more addictive. With this information, Caprio blackmails the professor in giving him all the Nightfall he can move for free and one time fee of five million dollars. Kirchner agrees with the deal and says that Tomas will deliver the first two million to his boat, while the rest will be given on Caprio's next visit. As he leaves, Kirchner calls his informant to ask Gerry if he's interested in managing their entire East Coast distribution. Kirchner then sends a pack of Darklings to kill Caprio.

Some time later, Kirchner contacts Jackie, informing that he has a lead on his attackers. Kirchner tells that they should focus on tracking down Colonel Sampayo and Marisol the leader of the resistance movement, which surprises Jackie. Jackie decides that he will go after Marisol, while Kirchner will go after Sampayo. He then leaves. Elle then comes to talk with Kirchner. As Kirchner tries to examine her, Elle tells that she is afraid of him and freaks out. Kirchner uses a voice command to make her docile, revealing that he has been changing Elle behind Jackie's back. He then erases Elle's memory of their conversation.

After taking out the US government helicopters that attacked his mansion, Jackie comes back home and orders Kirchner to pull out from the country, before Americans return with more serious equipment. Kirchner refuses, citing that he and Elle are working on special project. Jackie doesn't care and orders Elle to come with him, but she refuses. Not having time for this, Jackie sends Darklings to bring Elle to him, but instead they attack him. Kirchner accompanied by Elle run away.

Later after Jackie comes back and then escapes again, Kirchner calms Elle down and urges her to forget Jackie. Kirchner plans to become the new father to Elle's child. She then feels the baby pushing and Kirchner takes her to the labs. On their way, Kirchner finds a phone dropped on the ground. As he watches the footage of Elle's fight with the rebels, he realizes that the phone activates the suicide vest, which Jackie wearing and decides to activate the it, mocking him as he does that.

Kirchner then returns to Elle, finding her about to birth Jackie's Offspring. He decides to make cut open her stomach, but before he can do that, the stomach bursts open. Out of it comes out a fully grown Darkness creature, which proceeds to decapitate Kirchner.

After being killed, Kirchner\s soul travelled to the Realm of The Darkness version of New Jersey. He's eventually found by Danny Estacado who convinces Kirchner that it would be beneficial for him to work for Estacado. Kirchner then began to develop Nightfall for Danny to sell in the city, while also secretly trying to steal steal some remnants of the Darkness power from him for his own use. Eventually, Kirchner is confronted by Jackie who travelled to the realm in order to kill the Darkness itself. Jackie isn't happy to see him and warns Kirchner to not say any word to him. As Danny and Jackie leave, the Darkness takes over the exoskeleton he was building for himself. The Darkness is furious that Kirchner is trying to steal its power for himself, but is also impressed by the professors mind. Instead of killing him, the Darkness decides to possess Kirchner and use his mind to help it kill Jackie.

After Jackie kills Heart of Darkness, Kirchner like the rest of the Realm of the Darkness denizens are guided to their final judgement by the Shepherd of Sinners.

Kirchner was amoral and inquisitive scientist who worked for various crime families in order to erase his gambling debts. After he discover the Darkness, Kirchner becomes obsessed with its limitless possibilities. His extended curiosity lets Kirchner to bend the Darkness power to perform at levels unachieved by even Jackie. Some of his achievements include distilling the Darkness into a highly addictive drug, creating a Darkling concubine and crafting an exoskeleton. 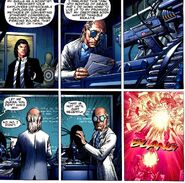 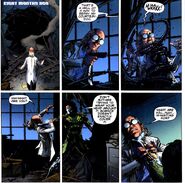 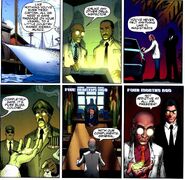 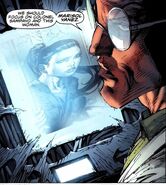 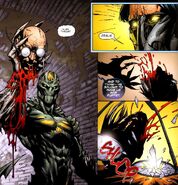 Kirchner taken over by the Darkness exoskeleton 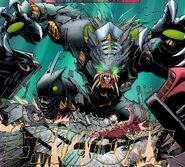 Kirchner in the Darkness exoskeleton

The Darkness exoskeleton releasing Kirchner's body
Add a photo to this gallery
Retrieved from "https://thedarkness.fandom.com/wiki/Professor_Kirchner?oldid=19623"
Community content is available under CC-BY-SA unless otherwise noted.