"I mean, who cares about a coupla fried orphans when you could own the world?"

Paulie Franchetti was the cousin of Frankie Franchetti, who ran various operations for the family in Philadelphia. After he hears about Frankie's death, Paulie travels to New York to take over the Franchetti Mafia.

When Jackie Estacado returns from death, Nino Pirelli informs him of his returns. Paulie orders Pirelli to set up a meeting with him. Later, Paulie meets Jackie at the his former orphanage.  Paulie offers Jackie to work for him, but the latter rejects the offer. As Paulie leaves, the orphanage explodes, killing everyone inside.

The next day, Paulie is feeding his pet tarantula, while a henchman brings him news that the men that served Frankie won't serve him until Paulie proves himself. For this, Paulie shoots the henchman. Paulie declares that if the old mobsters will not serve him they will be on the "menu". He then sends two mobsters to kill Nicky Barrucci.

After hearing that the two mobsters were killed, he hires The Triplets to kill Barrucci and Jackie. Later, Paulie is informed that Jackie got away and killed the Triplets in the process. He goes into rage and breaks his phone as his girlfriend leaves him. He then gathers his men and set out to an old warehouse to meet Jackie.

After the warehouse is cleared from Algerian mafia by Jackie, Paulie confronts him and offers a place as his right hand. Jackie answers by pushing Paulie and kicking him on the ground. Paulie says, that he won't kill him because he knows what he doesn't know and that gives him an edge.

Paulie reveals that Jenny had a sister that even she didn't know about. He blackmails Jackie into working for him, warning that if he refuses his hired sniper, which identity even he doesn't know, will kill her. He also says that if he doesn't call the sniper ever twelve hours, the sniper will shoot Jenny's sister. Together with Paulie, Jackie goes to the Frankie's old crew and declares that from now he works for Franchetti.

Next day, Paulie meets Jackie in a restaurant. Paulie threatens that if Jackie doesn't stop snooping around for help to find out the shooter, he will make Jenny's sister life miserable. Unknown to Paulie, he spits out the information were the shooter could be to Jackie.

Jackie and Paulie are locked in a shoot out. Jackie reveals that he has called the police, because only they can turn off the electricity to the building. He then tells Paulie to look into his rooms dark corner. Paulie listens and is scared by a group of darklings. Paulie tries to beg for his life, but Jackie doesn't listen and proceeds to kill him. SWAT storms in only to find horribly mutilated Paulie's body.

Realm of the Darkness Edit

Like other sinful souls killed by the Darkness hosts, Paulie was sent to the Realm of the Darkness after death. There, he continued his criminal activities in the Darkness version of New Jersey. After Jackie enters the realm, Paulie confronts him for being in his turf. Although not remembering Jackie, he opens fire on Jackie and a homeless man and drives away. Seeing that Jackie has survived the attacks, Paulie turns around the car and attacks him again. Jackie then lifts part of the road causing the car to fly into a building and explode.

Paulie is a vicious psychopath who has no regard for the lives of others.

He is incredibly arrogant, petty and narcissistic, believing that if any opposes or defies him, they should die immediately. As such, he will engage in vicious retaliation against the slightest offence against him. He's also incapable of taking responsibility for his actions, and instead blames everyone around him for his own actions, especially Jackie.

Paulie has an extremely short temper; it takes very little to provoke him. He's also shown to be incredibly sadistic, and is very abusive to everyone around him, even his own henchmen. Despite this, he still expects absolute loyalty from others, further displaying his psychopathy.

Paulie has absolutely no moral standards to speak of; this is best seen when he destroys an entire orphanage full of children just to make a statement to Jackie. 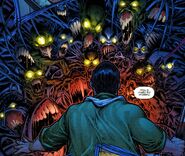 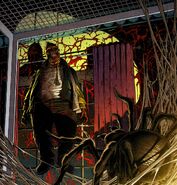 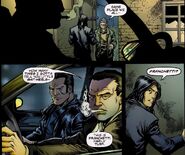 Paulie in the Realm of the Darkness.

Paulie opens fire on Jackie and a homeless man.

Jackie killing Paulie for the second time.
Add a photo to this gallery
Retrieved from "https://thedarkness.fandom.com/wiki/Paulie_Franchetti_(Comics)?oldid=19519"
Community content is available under CC-BY-SA unless otherwise noted.