Moreno is a helicopter pilot appearing in The Darkness comics series.

Moreno was stationed at Sierra Muñoz upon orders from Major White. Together with four other Apache helicopters, Moreno attacked Jackie Estacado's mansion. He manages to destroy the mansion, before Jackie jumps on top of his helicopter. As he breaks into the cockpit, Moreno tries to shoot him, but Jackie incapacitates him. Jackie then proceeds to wreck the flight controls and crash the helicopter, much to Moreno's horror. 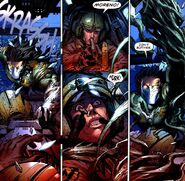 Jackie crashing Moreno's helicopter
Add a photo to this gallery
Retrieved from "https://thedarkness.fandom.com/wiki/Moreno?oldid=16337"
Community content is available under CC-BY-SA unless otherwise noted.