"I promise to do all in my power to come back for you."

Mireille De La Croix was the mother of Arianne De La Croix, the descendant of Sarah, the daughter of Mary Magdalene and Jesus Christ, and heir to House of Benjamin and Davidic line.

Mireille grew up in Montsalvat Abbey in France mountains where she was taken care of by Perfecti Vivienne. There she learned about her holy heritage and was trained in arts of combat. At some point, Mireille gives birth to a daughter, which she names Arianne.

When Pope Innocent III creates a new insidious institution, the inquisition to destroy the last remnants of Cathars, Mireille decides to put a stop to this. In the year 1239, the end of September, Mireille leaves her daughter Arianne in the care of Vivienne and the good sisters at Montsalvat. She also leaves their family's heirlooms and a letter for Arianne, explaining her reasons to fight the inquisition, her heritage and gifts in case she doesn't return.

Mireille then leaves Montsalvat Abbey and joins the fight against the inquisition. Although she fights ferociously, Mireille is overwhelmed and killed in a battle.

Mireille was courageous woman, who couldn't stand when mindless slaughter and injustice was done to innocent people. When the church sent inquisition to eradicate Cathars, Mireille decided to stand against them and do everything in her power to stop them.

Mireille leaving Arianne in the care of Perfecti Vivienne. 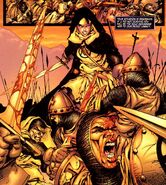 Mireille fighting against the inquisition.
Add a photo to this gallery
Retrieved from "https://thedarkness.fandom.com/wiki/Mireille_De_La_Croix?oldid=20215"
Community content is available under CC-BY-SA unless otherwise noted.