Megan and Jenny were separated at birth leaving both in the dark of each other existence. Eventually, Megan married and gave birth to a child.

After finding out about Megan, Paulie puts a sniper near her house and used this as leverage against Jackie Estacado. Jackie tracks down the sniper, David Lizewski and kills him. Megan thinks that she something outside. Johnny, her husband calms her and says that there's nothing there. It's then revealed that Jackie is looking at the window from the darkness.

Jackie meets Megan in a park the next day and looks at her. Megan calls him out for looking at her, but Jackie apologises, saying that she remind him of someone he once knew. He then gets up and leaves.

Megan seemed kind hearted and very protective of her child. 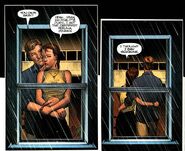 Megan with her husband.

Megan meeting Jackie in the park.
Add a photo to this gallery
Retrieved from "https://thedarkness.fandom.com/wiki/Megan?oldid=16802"
Community content is available under CC-BY-SA unless otherwise noted.