"Ya gotta believe me, I had no choice!"

– Luigi Palladino to the Vendettas. [src]

Luigi Palladino is a gunrunner and a counterfeiter, appearing in The Darkness II Vendettas campaign.

Luigi was a gunrunner and counterfeiter who operated in New York. He was good friends with Swifty and would often work with him on various jobs. At some point, Luigi and Swifty were approached by the Brotherhood with an offer to assassinate Jackie Estacado in return for a large payment. Although Luigi is hesitant to accept this offer, the Brotherhood threatens to kill all his family, including his mistress, leaving him no choice, but to go through with it.

Luigi together with Swifty then proceeds to set up an ambush at Mama Lucchesi's for Jackie. The Brotherhood also tasks Luigi in printing strange symbols on paper with a Darkness artefact given to him.

After the Vendettas retrieve a Darkness artefact from Broadside Paper Factory, they're sent by Johnny Powell to find and interrogate Luigi. They find him in Riverside Houses, hiding in a trailer. In order to reach him, the Vendettas plant an explosive charge given by Dolfo to blow open the trailer. Although Luigi tries to convince the Vendettas that he had no choice and doesn't anything about the people who hired him, the mercenaries go through with their plan and proceed to kill him and retrieve another Darkness artefact that he kept with himself in the trailer. 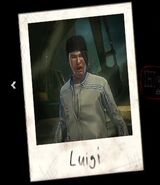 Luigi hiding in his trailer.

Wounded Luigi sitting besides a Darkness artefact.
Add a photo to this gallery
Retrieved from "https://thedarkness.fandom.com/wiki/Luigi_Palladino?oldid=17753"
Community content is available under CC-BY-SA unless otherwise noted.