"Business you retire from. Politics... maybe. Family, you don't retire from. Not when there's a question of honor."

Lucio Franchetti is a mobster and the oldest member of the Franchetti family. He blackmails Jackie Estacado in tracking down and killing a biker gang known as Demon Riders, who thirty-five years ago killed his two brothers. After Jackie finds out that Lucio lied to him, he puts the soul of Pestilence inside of him, turning him into one of the Four Horsemen of the Apocalypse and imprisoning him for the rest of his life.

Lucio was a notorious mobster and member of the Franchetti family, who dealt in various criminal activities, together with his two brothers.  One day, Lucio finds out that his brothers have set up a deal and excluded him from it. For this betrayal, Lucio hires a local biker group called Demon Riders to kill them. He then sets up a hit to kill the bikers and get rid of any loose ends, leading to him. Unfortunately, the Demon Riders disappear.

The Return of the Demon Riders Edit

Thirty-five years later, a county sheriff Griffin who once was a simple cop and worked for Lucio back in the day, sees these bikers drive by him. Remembering that Lucio had a contract on these guys, sheriff Griffin stops the bikers and takes a picture of them. Sheriff then sent Lucio the picture he took of those bikers along with a message questioning his own sanity. Lucio understands why he might feel this way as the bikers, besides losing some weight, they haven't changed much. Feeling that something strange is happening here, Lucio decides to invite Jackie to his house and hire him to kill the bikers.

At Lucio's house, the man himself is already waiting for Jackie and points out that he's late. Jackie questions him as to why he invited him for a meeting, having heard that Lucio has retired. Lucio answers that you don't retire from family, especially where there's a question of honor. He reveals having heard about Jackie cheating death and surviving more hits than Castro.

Lucio then asks why did Jackie came alone. Jackie answers, that maybe he trusts him. Lucio isn't pleased with this answer, deciding that he's not worth his time and orders his henchmen to shoot him. At that point, Jackie tells Tony, one of the road workers, to shutdown the power in the mansion. With lights gone, Jackie unleashes his Darkness powers onto horrified Lucio and his men. After dispatching his guards, Jackie tells Lucio to say a prayer before he sends him to Frankie and Paulie.

Instead of praying like Jackie told him to do so, Lucio explains that this isn't about Frankie and Paulie as he could care less about those two. In reality this was test to see what kind of abilities Jackie has and if he will be useful to him. He also adds, that if Jackie wants to kill him, he can't do that as Lucio got tired of living a long time ago. Jackie refuses to do so, but asks Lucio to tell the truth behind all of this. Lucio explains, that back back when he was running the West Coast, he had a deal with the biker gang, known as the Demon Riders. They were bringing a shipment of narcotics up from Mexico, when they decided to keep both the money and drugs for themselves. Before disappearing into the desert, they left half-dozen of their men dead, two of which were Lucio's brothers.

Lucio wants to put this right now as the bikers have returned thirty-five years ago, haven't aged even the slightest. Jackie asks where the bikers are now and Lucio answers that when the sheriff pulled them over, they were heading to a town called Ginsberg and that's all he knows. Confused, Jackie asks why didn't the sheriff followed them. Lucio explains, that five minutes after Griffin sent the message, he drove in front of an eighteen-wheeler truck, killing both him and his deputy.

Lucio points that some weird things are happening, but having seen Jackie's powers, he believes he's more than capable to deal with them. He tells Jackie that if he kills the bikers for him, Lucio will forget what he done to both Frankie, Paulie and what happened tonight, including the loyalty of his people.

Becoming the Horsemen of the Apocalypse Edit

The next night, Lucio Franchetti is visited by Jackie. Lucio asks him if he killed the bikers and Jackie decides to bring him to them. Jackie takes Lucio the cave in Sierra Nevada, where the bodies of the horsemen reside. Inside, he finds three bodies of the bikers, sleeping in their respective chambers. Jackie and Charlie then confront Lucio, revealing that forty years back, it was him who hired Demon Riders to kill his brothers. Charlie asks Lucio as to why did he put them on hit after all these years and why did he wanted his brothers dead. Lucio explains that he would killed the bikers back then if he could. He also adds, that he wanted his brother dead, because they were cheating him and setting up some deal he doesn't remember any more.

Realising, that Jackie is now probably going to kill him, he tells him to do this already as he's not afraid of dying. Micheal then comes in and instead of killing Lucio, traps Pestilence inside of his body and puts him on one of the caskets containing the other horsemen. Charlie then apologises to his fellow bikers for trapping horsemen inside of their bodies. He adds that he will send some music for the keeper to play to them in order to lift the boredom a little. Charlie then turns to Lucio, hoping that Pestilence will keep him incontinent for the next hundred years.

Lucio is a ruthless businessman, who gave preference to business over the lives of his own family. He hated when deals were arranged behind his back. When his two brothers arranged a deal with Mexicans, Lucio hired a biker gang to kill them, caring little that they were his own brothers. He would also use lies and deception to trick others into doing dirty work for him. 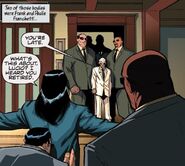 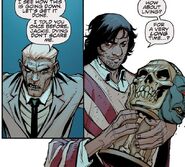 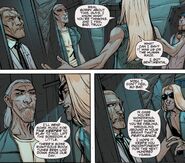 Lucio put in a wooden casket after the spirit of Pestilence is transferred into him.
Add a photo to this gallery
Retrieved from "https://thedarkness.fandom.com/wiki/Lucio_Franchetti?oldid=18746"
Community content is available under CC-BY-SA unless otherwise noted.