"The world's a cesspool, Jackie. People are dying and suffering, and no one's doing anything about it. It's our turn to make the decisions."

Lori Pappalardo is a character appearing in The Darkness comics series.

Lori was born inside of Jackie, growing inside his nose cavity. After Jackie falls asleep near Grand Lux, she together with Mickey Vern leave his body and travel to the nearby casino. There Lori and Mickey create new identities for themselves.

As Lori was being thrown out of the casino, Jackie steps in and protects her. The two go to an elevator where she reveals to be Lori Pappalardo and offers to show how "grateful" she is to him. Jackie refuses saying that he just wants to head to shower and have some sleep.

Ten minutes later, Jackie gets visited by Lori and her friend Alexandria. They want to have a party with him, but Jackie refuses and goes to sleep. The girls go in his suite anyway. Jackie then passes out as the girls decide to stay in his suite for the night.

Jackie sleep is interrupted by Lori screaming at hers friend mutilated body. Jackie tries to calm her down and Lori reveals that Alexandria is the daughter of Ivan Petrovich also known as Bloody Ivan. She tells Jackie, that because she was responsible for Alexandria, Ivan will now kill her six year old son Daniel. Jackie again tries to calm her down and asks where her son lives. Suddenly, Mickey and his crew walk into the room. Seeing the mess and having business with Russians, he decides to inform Ivan about the incident taking Jackie and the girl with him. Jackie unleashes the darklings, but they decide to not help him and instead live him to the mercy of Mickey's men.

Mickey Vern questions Jackie as to what happened in the room and puts all blame on Lori. Jackie then pulls out a knife and stabs one of the henchmen in the eye. He gets closer to the dark closet and pulls out an Uzi out of darkness. He then proceeds to open fire on Mickey and his men. Jackie grabs Lori and they escape the room. They reach a stairway and gets some clothes. Together, Jackie and Lori go to the casino floor.

At the casino floor, Jackie asks Lori for money and she gives it to him. He then goes to play with dices, winning every time. Casino security suggests Mickey to take him out the back and find out how he's winning. Mickey refuses and decides to deal with this personally. When Mickey comes, Jackie manages to persuade him into sitting for a chat and guarantees protection for both him and the girl.

Later at the fifteen lounge, Jackie asks Mickey to give his time and don't inform Ivan about the incident until he help Lori and her son to disappear. Mickey agrees, but only one condition, Jackie must kill three people for Mickey all of which are in the hotel. After some persuasion from Lori, Jackie agrees, but only if Mickey will give sixty thousand dollars to the girl and her son. Mickey agrees and they shake hands.

Back in the room, Lori thanks Jackie for helping her. Darkling voices return, expressing how much they hate him. One of Vern's henchmen come in and leaves a box with three guns and three letters. Each gun is for different hits. Jackie points out that blood is coming from henchmen nose. Lori then reads the three letters.

The first target is Carmine Santorini, a big mobster from Baltimore. The second one is Santiago Ferrer a man that conspired in a plot to kill Mickey. The third one is Seymore Will a child molester. Jackie kills all three of them and at sunrise he meets with Lori. She kisses him and says her farewells as Jackie sleeps on the beach.

Lori appears and reveals that after she left Jackie, Mickey men took her money away. She manages to runaway when the police arrived. She also tells that Jackie didn't kill mobsters or rapists like Mickey said, but instead innocent people. Jackie goes into rage as darklings begin to mock and laugh out of him. Lrri manages to snap out Jackie and together they head to casino floor.

At the casino floor, Jackie and Lori is quickly noticed by a wife of one of the murdered men. Police surrounds both of them and Lorri asks Jackie to do the same trick he pulled when Mickey confronted them. Jackie instead goes into rage and attacks the officers with bare fists, screaming that he doesn't need the Darkness. As officers subdue him, Jackie envelops in Darkness armour and breaks free. Together with Lori they run away.

Back at Mickey's suite, Mickey informs his henchmen to find and protect Jackie from the cops. Suddenly, Jackie breaks through the door and attacks them, instantly killing the henchmen with a chain. Blaming Mickey for betraying him, they lock into fist fight. As Jackie throws Mickey into a fish tank, is revealed that Mickey is actually slug like creature that escaped from Jackie's nose into the casino. Mickey reveals that Darkness hosts always have creatures like him born inside of them. Jackie then proceeds to kill him.

Later, Jackie and Lori hide in one of the hotel rooms. Lori tries to call her mother, but she doesn't answer the phone. She reveals that one time a drunk ex-husband stabbed her twelve times. Doctors had to remove some of the damages organs. Because of this she can have any more children. She calls her mother again and finds out that both her and Daniel were found near an airport with their throats slashed. Jackie promises to kill Ivan and destroy his business in most horrible way possible. Lori then kisses him and they have sexual intercourse.

As they lay in bed, Lori suggest Jackie to use his power to get rid of people like Mickey or Ivan from the world. Then a police officers storm in the room. With some persuasion from Lori and darklings, Jackie unleashes the Darkness. After killing the officers, The Darkness heads straight to the casino floor.

Jackie enjoys the comfort of Lori. One guy begins to choke another man and Jackie steps in. He asks why did he do it to, which the man answers that he just wanted to see what will happen. Suddenly Jackie is shot by a mysterious shooter. Lori then quickly sends the darklings after him. Jackie heals his wound, while darklings report that they lost the shooters scent.

Later, in their suite, Jackie ponders whatever he needs to kill the man that tried to choke another. Lori says to forget about him and that he enjoys killing people. She then sends a group of women to pleased him.

They later return to casino floor and Lorri urges Jackie to make plans as when people find out what they did here, they will come after us. Suddenly, mobsters storm into the casino and begin to shoot everyone, while looking for Jackie. It's "Bloody" Ivan. The darklings quickly kill the mobsters and Jackie then prepares to kill Ivan for killing Lorri son. Ivan expresses that he doesn't know what he's talking about. Lorri asks Jackie to let her kill him. She grabs a gun and shoot Ivan through the head. She then shoots another guy, expressing how it feels good to kill. Jackie stops her and gives her a kiss.

Out of nowhere, Mickey throws a knife at Lori's back and reveals to be the shooter. He tries to convince Jackie that he's being conned by The Darkness. Before he can tell anything else Lori attacks him with a knife. Jackie getting sick of all of this turns off the lights much to Lori's horror. As the lights disappear, Lori's true form as a darkness slug-like creature is revealed. Both Mickey and Lori try to persuade Jackie in joining their side. Mickey offers for Jackie to come with him to Trenton. Lori then grabs a surgeon and offers Jackie to gain knowledge of human body and make hundreds of women who would serve him by eating his brain. Jackie refuses and out of rage Lori attacks Mickey. Jackie then stops Lori and puts her inside a cage. Lori ask Jackie if he's going to throw everything away just because he saw her true form. Jackie answers yes, shrinks her with the cage and eats it.

On the outside, Lori looks like down on her luck girl, that is trying to ensure a bright future for her six year old son Daniel. In reality she is a manipulative spawn of Darkness, representing the darker side of Jackie. Lori uses deception and lies in order to gain control over Jackie.

Lori wanted to make people free by letting them to give in into their primal desires like lust, perversion and cruelty just for fun. She also shown to be ruthless, highly aggressive to others and taking satisfaction in killing others. 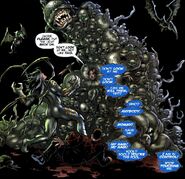 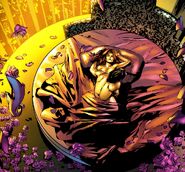 Lori stabbed in the back. 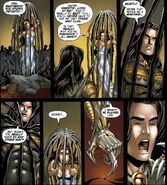 Lori consumed by Jackie.
Add a photo to this gallery
Retrieved from "https://thedarkness.fandom.com/wiki/Lori_Pappalardo?oldid=17520"
Community content is available under CC-BY-SA unless otherwise noted.