"Sounds like one of us is going to be buried at the bottom of page eight."

– Lois after Kent gets a filler story. [src]

Lois Lane is a Pulitzer Prize-winning journalist for the Daily Planet of Metropolis and the primary love interest of Superman, appearing in The Darkness/Superman two issue comic.

The Daily Planet newsroom is buzzing with rumours of mob war between Roberto Grasso, Jr. and Jackie Estacado as Lois comes late. Perry White gives her coverage of the story while Clark Kent gets a mouthful from Perry over his lateness and is awarded a 'filler' story as punishment. Clark and Lois leave the meeting and head to a supply room for a tender moment. As usual Superman is needed and off he flies into the sky.

Later, Lois and Jimmy Olsen watch from the shadows as a fight between Grasso and Jackie mobs bursts out. Then Lois and Jimmy are blindsided by a shadowy figure, which turns out to be Metallo and takes Lois hostage.

Metallo escapes with Lois to Grasso mansion. At the manson, Grasso and his men are waiting for Superman to show up when suddenly lights switch off in the house. Jackie appears out of darkness and immobilizes Grasso and his crew. Suddenly, Metallo attacks Jackie from the back with his hand held gatling gun. Jackie then uses his Darklings to take him apart. Immobilizing Metallo curses Jackie, but he ignores him and goes to Lois. Jackie introduces to Lois to, which in return she punches him in the chin.

Jackie returns Lois Lane to him and asks him to reconsider his earlier offer. Superman refuses yet again and they begin to fight with each other. Eventually, Superman wins the fight.

At the Daily Planet, Lois tells Superman that someone killed Grasso and his entire crew, wiping out organize crime in the metropolis.

Lois is a charming and kind hearted yet stubborn woman. Lois is caring and is always there for Superman when he needs her. She is Optimistic and full of morals like Superman she believes killing is wrong and doesn't let her emotions cloud her judgement. 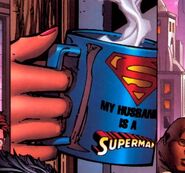 Lois cup
Add a photo to this gallery
Retrieved from "https://thedarkness.fandom.com/wiki/Lois_Lane?oldid=14014"
Community content is available under CC-BY-SA unless otherwise noted.