"This is what we were trained to - hell, born to do, men. Be precise and be deadly!"

Lofrumento is a character appearing in The Darkness comic series.

Lofrumento met with Joe Siry, Jake McCarthy and other renegade cops at White Bull tavern. There they planned to take out both sides of the gang war. Although Jake is hesitant to join, he ultimately agrees with the plan.

Battle at the National Museum Edit

Lofrumento stayed outside while other renegade cops when inside the museum. As the fight erupts between the Yakuza and Jackie Estacado, Lofrumento quickly lost control of the situation. Siry screamed at Lofrumento blaming him for getting them into this mess with latter apologizing. Sara Pezzini then interrupts him, telling to stay here and make the things worse as she runs into the museum.

Lofrumento was hardened cop that was more than willing to go above the law in order to stop the gang war and people responsible for the attack on NYPD. 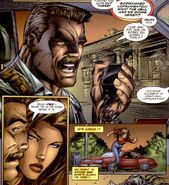 Lofrumento at the museum
Add a photo to this gallery
Retrieved from "https://thedarkness.fandom.com/wiki/Lofrumento?oldid=14013"
Community content is available under CC-BY-SA unless otherwise noted.