"She was different. Special."

Leticia Gomes was the wife of Salvador Gomes, mother of Zarita Gomes and former girlfriend of Teo Estacado.

At some point, Leticia fell in love with Teo. They got really close to each other, but after his 21st birthday, Teo awakened his Darkness powers. In order to keep Leticia save from him, Teo decided to end their relationship, hoping that she will find a better man, that would protect her above else.

Sometime later, Leticia found another man, Salvador Gomes and proceeded to marry him. Together they had a daughter named Zarita. Years later, Salvador started an affair with a local prostitute, Alexandra. Blinded by passion, Salvador decides to kill his family and run away with his new love. He proceeds to set on fire his house. As the flames spread, Leticia and Zarita get trapped inside and burn alive.

After her death, Teo proceeded to find Salvador and the disguise of the Shadow God, torture him with visions of this act and kill him.

Leticia with her daughter Zarita in her bedroom. 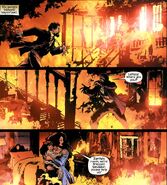 Leticia with Zarita burning in the fire.
Add a photo to this gallery
Retrieved from "https://thedarkness.fandom.com/wiki/Leticia_Gomes?oldid=19077"
Community content is available under CC-BY-SA unless otherwise noted.