"At least now I can provide. For Miriam."

Mercenary Leonard Kim was part of an armed and well-trained security unit hired by the Sovereign to hunt and capture Jackie Estacado after the latter reacquired his powers. He knew little of their target, only taking the job to help pay off his family's deepening financial needs.

Working for The Sovereign Edit

Leonard Kim was part of a mercenary team, that was hired by the Sovereign to hunt and capture Jackie Estacado. Led by their team leader, Lockhart, they constantly ran training drills in a private compound belonging to Sovereign. They would shoot cardboard targets that were made to look like Jackie in the Darkness armour. After testing out their phosphorous rounds, Dominguez mocks the Sovereign, angering Lockhart, who scolds him.

He then orders Dominguez to clean up the target dummies. As he takes one of the targets, he finds another intact target behind it, much to Leonard Kim's confusion who taught that they cleared out all the targets. The target turns out to be the real Jackie, which proceeds to kill Dominguez and attack the rest of the group. The mercenaries begin to panic and Bissinger realises that Jackie has purposely waited until the group uses up their phosphorous rounds. He's then instantly decapitated by Jackie, while another mercenary named Kovacelic is ripped apart.

Lockhart calls the Sovereign asking him to activate the sunburst protocol. The Sovereign does this, causing ultra violet light to turn on in the room just when Jackie lunges at Kida. This disable Jackie's powers and leaves him powerless. Kida wants to kill Jackie for killing Bissinger, but Lockhart stops him saying that is up to the Sovereign to decide. The Sovereign himself then appears and mocks him. Jackie asks him why did he lied to him to which Sovereign answers that he enjoys tormenting his kind. Long ago, The Darkness took everything from him and the Sovereign was bound to the idols made in his image.

The Sovereign then claims that Jackie will live the remainder of his harsh live under these lights. Jackie then proceeds to shatter the Sovereign from inside, take the gun from Kim and shoot out the lights. He then unleashes his Darklings on the remaining mercenaries ripping them apart. Kim manages to run away and throws a flashbang at the Darklings chasing him. In order to escape from the Darklings, Kim hides in a vent. He then leaves a message for his daughter, expressing that he's sorry that he won't see her any more and wants her to think about him. Before he can finish, Jackie finds him. Jackie is impressed in Kim's resourcefulness and his focus during the fight. He offers him a position in an organization meant to track down and destroy all the Sovereign bodies. Kim agrees and sends another message to his daughter, saying that he's okay and she should forget the last message.

Kim then accompanied Jackie as he recruited Vike an enforcer and mob accountant Regis Tyne. Later they meet with the rest of team including Dev Ravada and Kash O'Neal. After explaining that for the next year they will be hunting ancient statues belonging to the Sovereign, his Darkness powers and that they can't enter New York, they head out.

They then travel to Saltillo in Mexico were they tracked down another statue and meet up with the rest of the team. Tyne declares that they have managed to destroy sixty percent of the Sovereign statues in the world. He reveals that the next statue, which was retrieve by American army from late Saddam Hussein is being kept by the USA government in Fort Knox. The team asks if Dev can get them into the Fort Knox to which he reassures them that he can.

The team pretends to be a civilian pyrotechnics specialist and plant explosives around the base. As the team waits outside in the van, Jackie goes to destroy the statue. When he opens the container, Sovereign statues begins to glow. Unable to destroy the statue without making noise, Jackie decides to bring it to the van. He's noticed by the military who open fire on him. Jackie ignores them and brings the statue to the van. As the team escapes, they detonate explosives in the base. This causes Jackie to fall out the van. The team decide to leave him behind, knowing that he can take care of himself.

Kash then proceeds to camouflage their van into a delivery truck in order to escape police. As they decide what to do with missing Jackie, The Sovereign contacts them through the statue. The team want to destroy the statue, but Dev first wants to hear his proposition. Sovereign wants the team to walk away and let this be settled between Estacado and him. In return the Sovereign will double their payment. Kim isn't convinced, having heard how he manipulates and double crosses others for his own agenda. Kim and Vike then attack the Sovereign, but are quickly knocked out. Leonard then reveals to have attached a C-4 to the Sovereign's back. He quickly tells Kash to stop the van, forcing Sovereign to fly through the front windshield. Kim then activates the explosives and destroys the statue.

When the team travels to buy the Sovereign's statue from Vasily Martynov, Kim stays behind, guarding the plane. As the team come back, they're stopped by Vasily who has betrayed them. He reveals that he wasn't selling the statue, but buying their boss. Dev reveals to have betrayed the team and sold out to Martynov months ago, setting this all up in order to trap Jackie. They then seize the team's guns and personal belongings. As Dev leaves, Kim promises to kill him for what he did. After the Alkonost is freed, she breaks through Vasily's home and leaves. He's shocked to see all his treasures destroyed. Jackie's team then arrives, claiming to have freed all the kids he had imprisoned. Vasily tries to put all the blame on his bodyguard Arvo, but Kim doesn't listen and instead shoots him in the head.

Weeks later, Jackie and his team travel to Egypt to find the last Sovereign's statues. Kim, Vike and Kash take out the small militia defending the Sovereign's temple. Then they are attacked by an army of The Sovereign stone statues. The team is overwhelmed, but Jackie quickly destroys the army by using his Darkness powers. As the team inhale dust from the destroyed statues they lose conciousness and get trapped in a illusion, where Kim sees piles of gold.

Eventually Kim snaps out from the illusion and jumps to help Jackie to defeat the meteorite statue of the Sovereign. The Sovereign is confused as to how Kim managed to wake up from his illusion. Kim explains in the illusion, there was no one to share with his fortune. He then proceeds to shatter the statue and succumbs to the radiation poisoning. Jackie tries to help him, but Kim refuses saying that he doesn't want the Darkness inside of him. With the last breath he asks Jackie to send his payment to his family.

Although Kim immensely loved his daughter, he viewed himself as a bad father for not able to financially provide his family as he had problems with gambling. In order to fix this problem, Kim took various dodgy jobs and was often away from home.

After Jackie lets Kim to live and hires him to be part of his team, he becomes obligated to return this favour. During the final battle with the Sovereign, he sacrificed himself not only to save Jackie, but also provide the money to his daughter.

Kim training with the mercenaries 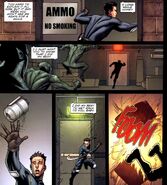 Kim throwing a grenade at the Darklings

Kim hiding in the vents 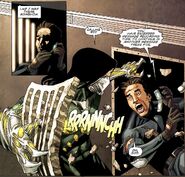 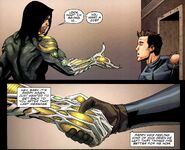 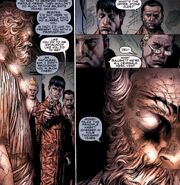 Kim aiming at the Sovereign 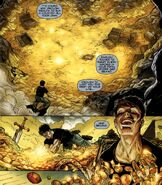 Kim stuck in a illusion 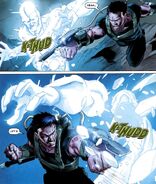 Kim fighting with the Sovereign

Kim succumbing to his wounds
Add a photo to this gallery
Retrieved from "https://thedarkness.fandom.com/wiki/Leonard_Kim?oldid=14267"
Community content is available under CC-BY-SA unless otherwise noted.