"I look into their eyes and see you standing over me - smiling - reaching into me and tearing out a piece of my soul for your own sick pleasure! So don't feel badly if you don't remember me, Estacado. You see, I've been trying to forget myself ever since."

Dr. Kimberly Yu Fang is a surgeon who gets traumatised for life by Jackie Estacado after failing to return her loan taken from Frankie Franchetti.

Kimberly struggled to get enough money in order to pay the medical school so she took a loan from Frankie Franchetti. After failing to return the money, Frankie sends Jackie Estacado to kill her. As Kimberly is confronted by Jackie she pleads him to spare her and offers herself sexually. Jackie agrees and after having sex with her, considers the loan to be paid, leaving her alive.

After this encounter, Kimberly eventually finishes the medical school and becomes a very well regarded surgeon

Kimberly wakes up and goes to take a shower. As she takes shower, someone calls at her door. When Kimberly opens the door, she finds Darklings carrying wounded and unconscious Jackie, and asks to help him. Darklings reveal that Jackie was shot at a restaurant during daylight and thus the Darkness couldn't save him. Kimberly refuses to help as Jackie tricked her into having sex when she couldn't repay the debt she took from Frankie Franchetti. The Darklings then threaten her into helping Jackie. They also call Wenders.

Forty-eight hours later, Jackie wakes up asking Wenders who the girl is. This infuriates Kimberly, but Jackie ignores her. Jackie then quickly calls Frankie, thinking that the people who shot him might attack Franchetti.

After Jackie and his Darklings mess around with her, Kimberly reminds him what he did to her many years before. Jackie apologizes to Kimberly for what he did and they reconcile. Suddenly, Wenders comes to them and urges to run away as giant monster is coming this way. Jackie then allows the monster to swallow his Darklings, which kills it from the inside. From the monsters remains Jackie figures that it was created by the Angelus. Jackie then lets Kimberly to return home as he continues to travel to Las Vegas.with Wenders.

After Las Vegas, Jackie meets with Kimberly and again apologises to her. Jackie gets slapped by Kimberly who declares that she might eventually forgive him, but not now.

Kimberly is deeply troubled woman. When she was still an intern she offered herself to Jackie in order to pay for her loans leaving her traumatized. Kimberly begins to see Jackie in other people and keeps experiencing the act. Because of this she develops apathy and even constantly wishes to die. For this Kimberly harbours a deep hatred towards Jackie and can't even accept his apology.

Kimberly also suffers from sexual depravity caused by Jackie having sex with her. Because of this she constantly sleeps with both men and women and also tends to flirt with opposite sex.

Jackie confronting Kimberly for her loan. 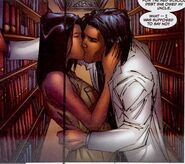 Kimberly in her apartment balcony.

Kimberly with her friends.

Kimberly kicking Jackie in the crotch. 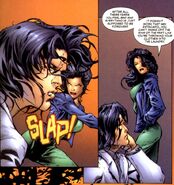 Kimberly walking away.
Add a photo to this gallery
Retrieved from "https://thedarkness.fandom.com/wiki/Kimberly_Yu_Fang?oldid=20518"
Community content is available under CC-BY-SA unless otherwise noted.