"Oh, you know - I forgot how beautiful you can be."

Mindhunter Kenneth Irons comes from the future, where the Earth is a scorched wasteland and only a Xenomorphs roam the world. Few humans that are left, worship Xenomorphs as gods. At some point, Kenneth built a time travelling, self-fixing spacecraft and travelled into the past. After arriving into the past, he captured Sara Pezzini and Jackie Estacado putting them in virtual simulation. He then watches and toys with them.

Playing with Jackie and Sara Edit

Sara Pezzini is working undercover in order to catch a local mobster Pellegrini. They dance together on New Year's Eve in a plaza. Outside the plaza, her partner Hank sits in a van, monitoring the situation. He warns Sara to be careful. Suddenly, her hand starts to become a Witchblade only to quickly comeback to normal. She starts to feel really hot and Pellegrini then reminds her of Jackie Estacado. Sara then fakes to fainting, prompting Pellegrini to invite her into his suite.

Inside the suite, Sara and Pellegrini have drink. After Pellgrini takes a sip of his drink, he quickly becomes ill and runs to the bathroom. Meanwhile, Sara questions her before this night and them recalls than Hank has retired four years ago. She thinks that she's hearing Witchblade, but then remembers that it is mute. At that point room service comes into the room, revealed to be Jackie Estacado. Jackie has come to kill Pellegrini. As Pellegrini starts to spit with blood, he hears their conversation and comes out to kill them. As Pellegrini comes out to confront them, both to their shocked a chestburster bursts out through his chest. The chestburster then runs off to Central Park. Both Sara and Jackie go after it. They head to the van, only to find Hank and his partner killed, skinned and hanged. They realise that it's the job of Predator's. Sara recalls their last encounter with them and questions their motives on Earth. She then points out that something is off with the world as if it was not real. Jackie then quickly grabs her as the van is destroyed by a Predator. The Predator runs away and they go after her with Sara pointing out that it's a she, much to Jackie's confusion. Jackie then reveals that he doesn't even remember ever taking the Pellegrini's job.

Then suddenly they're sucked into space. A hologram of masked person appears, revealing to be behind these nights events. Sara recognizes him as Kenneth Irons. Sara and Jackie are then transported into alternate future with Xenomorphs running all over the Earth. Kenneth reveals to be from the future, where humanity was enslaved by the Xenomorphs.

Trapped in Kenneth Irons nightmare world, where Earth is overrun by Xenomorphs. The pair are then attacked by facehuggers. Irons explains that in his future, Earth is a scorched wasteland and has an alien hive. He declares that it's Sara's fault. Then Jackie and Sara are overwhelmed by facehuggers.

Irons returns both Jackie and Sara minds back to their real bodies. It's revealed they been capture and trapped inside virtual simulation by Irons. The two escape from their holding cell and Sara comes up with a plan as to how to destroy Irons with his ship. Suddenly, Sister Midnight confronts them. Sara convinces her that together they have higher chance to escape. Sister Midnight then shows interest in her Witchblade, before leaping off. Then the pair are attacked by a swarm of Xenomorphs. They cause an explosion and escape into space.

Outside the ship, Jackie and Sara fight off Xenomorphs in space before returning back to the ship. Sara threatens Irons that if he doesn't meet them in the escape shuttle and bring them home, she will destroy the ship. Irons declares that he isn't even on the ship in the first place and activates ships self-destruction. They pair run to the escape shuttle, but are confronted by a Xenomorph. Jackie then loses his powers because of sunlight. The Xenomorph is then killed by a Predator just as Sister Midnight returns. Sara, Jackie and Sister Midnight manage to get inside the shuttle and escape as the ship explodes. Sara notices that something else has gotten inside, but Jackie calms her down saying that it's just a Darkling. She then prepares to fight the Sister Midnight before Jackie stops her, declaring that she isn't targeting them. Her true target is revealed to be a Darkling-Xenomorph hybrid, much to Irons amusement.

Mindhunter Kenneth Irons is an arrogant person with a twisted sense of humour. He enjoyed toying with Sara in his simulation and took amusement in her persistence and stubborn behaviour. Kenneth blames Sara for his future to be as it is. Although he still feels some affection to Sara. 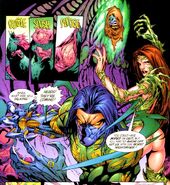 Kenneth Irons with his mask 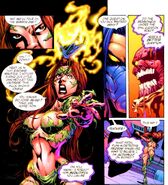 Sara threatening Kenneth
Add a photo to this gallery
Retrieved from "https://thedarkness.fandom.com/wiki/Kenneth_Irons_(Mindhunter)?oldid=14307"
Community content is available under CC-BY-SA unless otherwise noted.