Jenny Romano was the long time girlfriend of Jackie Estacado. They had a strong relationship based on Jackie's dishonesty about what he does for a living. He explains that he is a contract killer for Uncle Paulie, but she just laughs it off. She was kidnapped and killed by Paulie Franchetti.

Not much is known about her childhood, only that she was living in the St. Mary's Orphanage where she met Jackie Estacado. She was very nice to Jackie and even defended him from a bully. Later she realized she was in love with him and from then on was Jackie's girlfriend.

Jenny is kidnapped by Uncle Paulie and Eddie Shrote and taken to St. Mary's Orphanage, where she and Jackie grew up. After Jackie fights through the hordes of goons that Uncle Paulie and Shrote throw at him, the Darkness forces Jackie to watch the confrontation between Jenny and the two murderers. Paulie pistol-whips Jenny in the face and belittles her and Jackie for what they have supposedly done. The two notice Jackie is being forced to watch by The Darkness and drag Jenny over to the door. Paulie continues to mock and criticize Jackie for betraying him. He then forces Jenny against the door and shoots her in the head.

Jenny is mentioned and seen after her death in the game. The Darkness uses Jenny as a way to torment Jackie and force him into choosing his way. She is seen the second time Jackie visits The Otherworld in order to gain control of The Darkness. She can briefly be heard advising Jackie during his battle with The Darkness and she can be seen in the light hidden behind The Darkness during the fight.

Her final appearance in The Darkness is at the end of the game. Jackie awakes in a dream-like place and finds himself laying in Jenny's arms. She explains that they are given one last moment together to say goodbye and that "that's all they can allow". Jackie asks who but Jenny silences him and tells him he has to wake up. The game ends with the camera panning up into the sky.

Jenny returns in The Darkness II , once again as an illusion used to torment Jackie. She also appears as a nurse in a mental hospital in Jackie's Institution, (a place where he is sent while the Darkness repairs him from fatal injuries).

In this world, Jackie is clinically insane and only thinks he is a mob boss, and is infatuated with Nurse Jenny, who does not feel the same. The actual Jenny reappears later as The Darkness reveals he is holding her soul hostage and uses this as leverage to force Jackie to cooperate throughout the game, near the end of the game she is freed, and depending on what choices you make. You can stay with fake Jenny in the otherworld Institution, and dance with her until the game ends or you can travel to within The Darkness to save her.

If you save her, after kissing and hugging, it is eventually revealed she is the new host of the Angelus explaining why The Darkness contained her there. After the Angelus emerges, it yells at Jackie for being "too powerful of a host" and flies off, leaving Jackie and the Darkness in the Abyss within Hell.

Jenny in The Darkness opening. 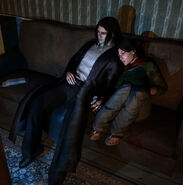 Jenny sleeping on the couch.

Jenny after she is murdered by Paulie. 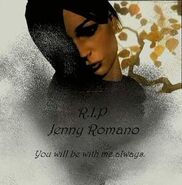 Jenny with Jackie in the afterlife.
Add a photo to this gallery

Jenny as she appears in The Darkness II.

Jenny trapped in Hell.
Add a photo to this gallery
Retrieved from "https://thedarkness.fandom.com/wiki/Jenny_Romano_(Games)?oldid=17563"
Community content is available under CC-BY-SA unless otherwise noted.