"My name is Jackie Estacado. Few years ago, I was nothin'. My life was just another sob story. That is, until fate came callin'. And with it, came power."

Jackie Estacado is the current human host of the Darkness, which awakened within him on the night of his 21st birthday. Jackie is an Italian-American ex-contract killer of the Franchetti crime family led by his "uncle" Paulie Franchetti. After killing both Paulie and Eddie Shrote in revenge for the murder of his girlfriend, Jenny Romano, Jackie became the don of the Franchetti family after he was offered the position by Jimmy "The Grape".

Jackie spent the next two years learning about The Darkness, as well as how to contain him. With the help of Johnny Powell, Jackie was finally able to contain the Darkness.

After the death of his parents at a very young age, Jackie was enrolled at St. Mary's Orphanage where he spent the majority of his childhood. This is where he met his future girlfriend, Jenny Romano. During his time at the orphanage, he nailed a frog to the front door. He was adopted by Paulie Franchetti of the Franchetti crime family when he was 12. Paulie only took in Jackie due to his need for another hit man and spent the majority of the time they spent together teaching him the inner workings of the family; however, Jackie reminisces on one time when Paulie took him to the subway to count the trains for vacation.

Jackie calls it "the best two days they ever spent together." He had his first kiss with a hooker named Candy down in the train station, and he knew a guy named Mickey Fat Lips who would feed subway tokens to his cat.

"I remember the night of my 21st birthday, That was the first time I died."

The player takes the role of Jackie Estacado, with the story presented as a future-narrative on the present events observed by the player. On the eve of his 21st birthday, Jackie was targeted for assassination by the don of the New York mafia, "Uncle" Paulie Franchetti following a failed task to retrieve money for the latter. While hiding in a cemetery bathroom, the Darkness, an ancient force that has inhabited his family for several generations, awakens within Jackie and slaughters the remaining mobsters, with the benefit of Jackie becoming the possessor of seemingly unholy demonic abilities that feed off the dark.

Using these powers, Jackie is able to survive further assassination attempts and track down Paulie, but not before Paulie and the corrupt police chief, Eddie Shrote, kidnap Jackie's girlfriend, Jenny Romano. They took her to the orphanage where Jackie and Jenny grew up, and murdered her in front of a powerless Jackie, unable to save Jenny due to the Darkness deliberately restraining him.

Once he recovers, he determines that he must dispose of Chief Shrote before he can face Paulie. Chasing Shrote to his apartment and then confiscating a briefcase containing illicit goods in Shrote's ownership and rigging it with an explosive, Jackie is able to lure Shrote out of hiding, but he is later shortly captured. After overhearing about a shipment of drugs that a Chicago mob is entrusting Paulie to handle, Jackie triggers the explosive, killing Shrote and his men along with himself. Jackie re-awakes in the Otherworld, and lays siege to the Darkness' castle with Anthony's help. Anthony is mortally wounded in the attack, but before he can tell Jackie the last steps needed to free himself from the Darkness, the spirit pulls him away.

Jackie faces the Darkness and surprises him by willingly being taken by the Darkness' power, allowing him to fully control the spirit back in the real world, however the Darkness tells him that while he has control now, each time Jackie takes a life, he will become more consumed by the Darkness. He lays an assault on the drug shipment, causing Paulie to flee to the safety of a lighthouse mansion for fear of retribution from the Chicago mob. Jackie takes advantage of a solar eclipse to raid the mansion and finally kill Paulie. The Darkness revels in Jackie's murderous spree, and fully envelops Jackie.

In the epilogue, Jackie finds himself in a dream in a park, lying on a bench in Jenny's arms. Jenny explains that they are only allowed a few minutes to be together one last time to say goodbye. Jackie tries to ask how, but Jenny just quiets him, allowing them to enjoy the last moments together before Jackie wakes up with the screen fading to black.

Two years since the events of the first game, Jackie Estacado has become the don of the Franchetti crime family. Though he still wields the Darkness, a malevolent force that has given him supernatural powers, Jackie has suppressed the entity, thanks to guidance from estranged occultist Johnny Powell. Jackie still struggles with the death of his girlfriend, Jenny Romano, which the Darkness had prevented him from stopping.

Jackie and his gang are attacked by a rival mob at a restaurant. After being rescued from the building, a mysterious figure appears and tells henchmen working for him to continue pressing the attack. While under attack, the Darkness calls to Jackie, demanding him to embrace the spirit. Jackie relinquishes, and with the Darkness' regenerative powers, stops the attacks and pursues the attackers into the subway. There, he reunites with the Darkling, part of his sub-consciousness created by the Darkness. He observes a vision of Jenny nearby, and ends up being run over by a passing train. As before, the Darkness refuses to allow Jackie to die. Jackie wakes up in what appears to be a psychiatric ward, where Jenny and members of his mob appear as doctors, nurses, and fellow patients, telling him that his mob stories are simply hallucinations inspired by mafia fiction. One of the patients appears to be Johnny, who tells Jackie to find him.

Jackie wakes up in the subway, regroups with his men, and uses them to find and bring Johnny to his penthouse suite. Johnny explains that Jackie is being pursued by an organization called the Brotherhood who seek the Darkness' powers for themselves, using the Siphon, an object created by an entity called the Angelus to contain the Darkness. Johnny provides a lead to the Brotherhood's location at a nearby brothel.

Jackie gains entry through help of a prostitute, Venus, and finds that the Brotherhood has been tracking him, his gang, and his family for many years, before he is captured by their leader, Victor Valente. Victor orders Jackie to be crucified, and demands Jackie to release the Darkness to him, revealing that they have taken over his suite. Jackie refuses and falls unconscious from blood loss, but after another brief vision of the psychiatric ward, the Darkness heals Jackie and awakens him. Jackie escapes the brothel, set aflame by the Brotherhood, and races for his suite, mounting an attack with his men against the Brotherhood. Jackie's Aunt Sara dies in the attack as they reclaimed the suite.

At Sara's funeral, Victor launches another attack against Jackie. In battle with Bragg, one of Victor's henchmen, Bragg reveals that Victor is operating out of an abandoned theme park. Jackie kills Bragg, and then orders his men to stay low while he alone travels to the park, where more visions of Jenny appear. He is soon captured by Victor in an iron maiden, and loses consciousness from blood loss. Again, he wakes in the ward, but the janitor - acting as his Darkling - warns him that this ward is a trap for Jackie to keep him alive and away from Jenny who is still alive but in Hell. Jackie eventually wakens in the real world, The Darkness drained by Victor. The Darkling helps Jackie to escape and defeat Mr. Peevish, another henchmen of Victor given some of the Darkness' powers.

Though Jackie recovers these for himself, they are but a shell of the full power of The Darkness, and pursues Victor, discovering they have taken him to his father's mansion. Engaging Victor in a battle to recover The Darkness, Victor reveals that Jackie's father had promised the Brotherhood the Darkness but failed to heed this. Eventually, Jackie defeats Victor and recovers the Siphon. Jackie stabs himself with it, retaking The Darkness but forcing him back to the ward dream.

Now aware that the ward is a dream, Jackie attempts to kill himself within it, the Darkling sacrificing itself to aid in this effort. Here, the player can decide to stay with Jenny on the belief this is reality, upon which Jackie and Jenny slowly dance to "I Only Have Eyes for You". Instead, the player can opt to throw Jackie over the edge of the building, sending Jackie into The Darkness' realm. Jackie fights the Darkness' forces to release Jenny, who at first thanks Jackie for his help, but soon is transformed into the Angelus. Though Jenny is still alive within her and loves Jackie, the Angelus has seen the destruction that Jackie and the Darkness have caused, and leaves them trapped in Hell as she leaves.

Jackie Estecado is a mobster with a twist, able to kill with little, if any, remorse, while still possessing compassion and selflessness for his friends and "family". He believed in the original reasons of a crime family, in which all members are considered part of a big family that takes care of itself. He enjoys the freedoms and vices of the job, and is willing to follow orders, but he wasn't blindly loyal to Paulie, and could tell something was wrong with him from the beginning.

As the new Don, Jackie was more "hands-on" than Paulie, as well as being more forgiving, but was still ruthless and dangerous when enraged.

"The first time you use the Darkness, it scares you. But once you've tasted it... you can't stop. It's all you think about. Like I said, it consumes you."

– Jackie regarding the Darkness. [src]

Jackie in The Darkness opening.

Jackie in The Darkness. 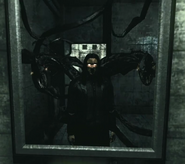 Jackie while using the Darkness.

Jackie with Jenny in the afterlife.
Add a photo to this gallery

Jackie in The Darkness II.

Jackie's medalion with the picture of Jenny in The Darkness II.

A picture of young Jackie and his father.

Jackie at the Institution.

Jackie from Darkling's point of view.

Jackie in the cinematic trailer.
Add a photo to this gallery
Retrieved from "https://thedarkness.fandom.com/wiki/Jackie_Estacado_(Games)?oldid=19450"
Community content is available under CC-BY-SA unless otherwise noted.