"Brave heart, my child. Though we walk to the very door of hell itself."

Issiah Rainmaker is a character appearing in the Tales of The Darkness: Prologue.

Issiah Rainmaker from the house of Rainmakers is stopped by the guards. He introduces himself and says that he is carrying a great discovery that he must show to prince Christian Estacado. After some persuasion the guards let them pass.

After Issiah meets with Christian he reveals that he's great discovery is a woman. Ariana Estacado warns him that it could be an assassin, but Christian disregards this as now one would dare to attack him. Issiah talks about the myth of Angelus and Ariana goes into rage, demanding guards to kill him. Christian disregards her again saying that only he decides who lives or dies under his house. Issiah finish his speech and then reveals the women that he brought with himself is the new Angelus. The Angelus says that she wants to be Christians mistress and he quickly accepts her, saying that he will finally experience love in her arms. Ariana goes into rage and shouts that Angelus will never be with his son as she pull out a knife and attacks her. Christian quickly stops her and kills his mother.

The next morning after Christian dies, Issiah leaves the castle together with Angelus.

Issiah seemed like a wise and clever man, easily outsmarting Christian and using his weakness to women against him in order to kill him. 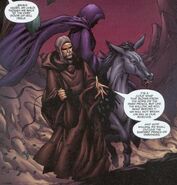 Issiah bringing Angelus
Add a photo to this gallery
Retrieved from "https://thedarkness.fandom.com/wiki/Issiah_Rainmaker?oldid=13951"
Community content is available under CC-BY-SA unless otherwise noted.