The Heart Stone is one of the Thirteen Artifacts. With it the wielder can see the auras. And has the power over life and death.

In an alternate reality, where Jackie Estacado lost control over the Darkness and wiped out humanity, Rachel Harrison, the wielder of the Heart Stone was one of the three last humans, besides Jackie and Michael Finnegan to survive on Earth. She started to live in a church located in New York, where she used her powers to reveal the Darkling copies of humans their true origin.

The Darkling version of Jackie's daughter, Hope sought Rachel multiple times, thus finding out about her true origin. This forced Jackie to erased her memories after each time to the point, that he begins to consider killing Rachel instead of keeping her alive.

The Heart Stone is said to have power over life and death. It could also dispel illusions, show auras and dead people. 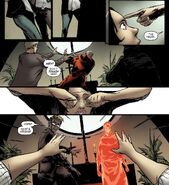 Rachel Harrison using the Heart Stone to make Hope see the true reality.
Add a photo to this gallery
Retrieved from "https://thedarkness.fandom.com/wiki/Heart_Stone?oldid=20632"
Community content is available under CC-BY-SA unless otherwise noted.