"He mercifully sent his Harvesters. Bio-organic vacuums, sucking up the crew, swallowing them whole. It's a mercy of sorts."

Harvester is unique darkling appearing in Tales of The Darkness: Issue 1.

The Darkness Foot-Creature is a giant insect -like looking darkling that serves the Dark Prince. Its a bipedal creature described as an bio-organic vacuums that swallows its victims whole. On top of his head, is a man that's fused to the creature that can communicate with its victims. 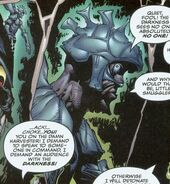 The human part of Harvester
Add a photo to this gallery
Retrieved from "https://thedarkness.fandom.com/wiki/Harvester?oldid=14081"
Community content is available under CC-BY-SA unless otherwise noted.