"There's yer problem, Guido. Fortunately for you, I don't pay ya' to think."

Guido is a character appearing in The Darkness comic series.

Guido guarded Frankie Franchetti as he was visiting Las Vegas. He comes to tell Frankie that his daughter Appolonia is waiting for him at the restaurant while his nephew, Jackie will meet him shortly. Frustrated, Frankie scolds Guido for telling him things he pays him to do. He then orders Guido to leave the room. As Guido leaves he's killed by Ricardo Amratto.

Guido seemed as loyal bodyguard who followed every Frankie's order to the point. Although Frankie does show to dislike him. 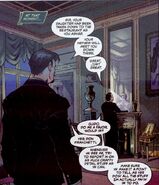 Guido reporting to Frankie
Add a photo to this gallery
Retrieved from "https://thedarkness.fandom.com/wiki/Guido?oldid=13938"
Community content is available under CC-BY-SA unless otherwise noted.