"Live your lives. Have the life together, destiny denied me!"

Gilandra is a fierce warrior appearing in Tales of The Darkness: Issue 1 and 2.

At some point, Gilandra birthed a daughter, which becomes Sela The Fox. Gilandra travelled to Rand 4, a desolate planet, were she participated in gladiatorial courtship ritual in order to become the mate of the Dark Prince. There the Dark Prince was tricked by Vassal into killing Gilandra. She then was consumed by Vassal into the Darkness, were she tried to keep herself alive.

As Vassal casts an illusion on Sela, making the Dark Prince to attack her, Gilandra appears behind Vassal, breaking the mindlock on the Dark Prince. The Prince hugs Sela and expresses love to her. Gilandra then urges them to run away until she can still hold Vassal. Reluctant, Sela and the Dark Prince escape. As they escape, Vassal overpowers Gilandra, saying that she will consume her and her daughters soul.

Gilandra is described as honourable and fierce warrior. She was willing to lay down her life for Sela and the Dark Prince. Gilandra also loved her daughter and had good relationship with her. She also has incredibly strong will, able to be the only one to have maintained her identity when consumed by the Darkness. 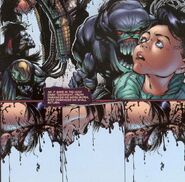 Gilandra killed by the Dark Prince.

Gilandra emerging from the Darkness. 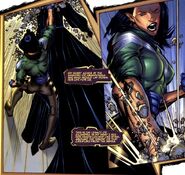 Gilandra fighting Vassal.
Add a photo to this gallery
Retrieved from "https://thedarkness.fandom.com/wiki/Gilandra?oldid=17908"
Community content is available under CC-BY-SA unless otherwise noted.