– Gerry asking Caprio to try out the Nightfall. [src]

Gerry Kiffin is a drug dealer from Miami appearing in The Darkness comic series.

Gerry Kiffin was invited by Caprio to come to Sierra Muñoz and make a deal with Jackie Estacado to sell Nightfall in the states. Together with Caprio, Gerry meets with Professor Kirchner and Jackie at the Cathedral.

Gerry is amazed by the Cathedral's design and Caprio introduces him to the new synthetic drug called Nightfall. Created from Darkness by Kirchner, the drug induces incredible sense of pleasure while not being physically addictive. Although the person won't be able to stop thinking and wanting the drug. By using this drug, Jackie and Kirchner were able to take the Sierra Muñoz from their previous leaders as long they got another dose of the drug.

Cautious, Gerry decides to buy Nightfall for two hundred thousands dollars. Kirchner explains that their minimum starts at half a million. Caprio proceeds to convince Gerry they he will quickly get back his money selling this drug. Convinced he complies with their offer. Caprio then tells Gerry that they will go over the details of the deal back at the hotel. Before leaving to think this deal through, Gerry is warned that the drug must be kept from direct sunlight.

Later, Gerry is contacted by Kirchner's informant, asking him if he's interested in managing their entire East Coast distribution. 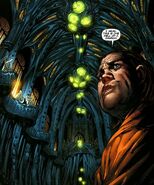 Gerry amazed by the Cathedral's design.

Gerry being introduced by Caprio to Nightfall.
Add a photo to this gallery
Retrieved from "https://thedarkness.fandom.com/wiki/Gerry_Kiffin?oldid=17915"
Community content is available under CC-BY-SA unless otherwise noted.