"You were like my blood, Jackie, an' you stole from me. You stole my trust, you stole my liberty. An' family don't never steal from each other - I thought you knew' that."

Francis Leopold Franchetti better know as Frankie Franchetti was the don of The Franchetti Mafia, the husband of Lauren Franchetti, father of Appolonia Franchetti, and the adopted father/"uncle" of Jackie Estacado.

Frankie started his life as a smalltime mobster. At some point Frankie married a woman named Lauren and had a daughter with her, Appolonia. One night when coming home, Frankie discovered Lauren to be sleeping with another man, Ricardo Amratto. Furious, Frankie tortured him in front of Appolonia. This event was so traumatic, that it left her in catatonic like state for the rest of her life. It was later discovered that her daughter, Appolonia, also witnessed the cruel act that caused her mothers state.

The young mobster was then visited by Sonatine who told him that Jackie's presence in his mob would make him mighty. With this knowledge Frankie went to the orphanage and adopted Jackie.

After Frankie incorrectly figures that Joey "The Scar" Scarpaggio who was ferrying tribute funds from Marchianni to Franchetti was stealing from him, he orders Jackie to kill him. The next day, Marchianni called Frankie, furious that he killed his to be son in law.

Frankie then finds out that someone gave out Joey Finnegan to Marchianni and begins to look for a rat in his organisation. Jackie notices Mo extremely sweating and decides that he might have something to do with this. Mo explains that it's because of his weight his sweating. Suddenly a grenade is thrown inside the room and Jackie throws Mo on it in order to save themselves. Mo absorbs the blast of the grenade saving everyone else in the room. He reveals that he didn't rat out Finnegan to Marchianni and says that he doesn't hold a grudge on Jackie as Mo dies.

That day, Frankie is shot by Trevor and Kevin Poznowski's. Frankie survives the hit, but is put into a hospital. After recovering from his wound he forms truce with the Yakuza.

Frankie's daughter Appolonia returns from Europe and he holds a welcoming party for her. Indenting to take control of Franchetti mafia, she asks Frankie to be involved in his business and become her fathers right hand. Frankie refuses, saying that this isn't what he wanted for Appolonia much to her frustration.

After Angelus takes over Lauren's body and puts Appolonia into a catatonic state, Frankie take cares of her. He promises to Jackie that someone will have to pay for this.

Frankie is carried to Golden Fleece casino where he's woken up by the Angelus and Ricardo Amratto with Appolonia sitting near them in the wheelchair. She reveals that Appolonia tried to become the host of the Angelus, but the entity was repelled by his daughters ambition. Instead it took his wife, Lauren as a host. Angelus also tells that Appolonia saw what Frankie did to Ricardo when she was only six. She tells that in order to become a completely host of Angelus and gain more power, she needs to kill Frankie. Angelus then order Ricardo to kill Frankie.

Out of nowhere, Jackie's double appears and shoots Ricardo. Angelus then subdues him, but is surprised that her flames doesn\t burn Jackie. Suddenly, he's shot by Appolonia, who reveals to have recovered after obtaining the Spear of Destiny. The double then reveals to be Sonatine, much to Appolonia's anger. Finally, Jackie and Wenders reach the basement and are attacked by Appolonia. A giant Darkling, Mal, appears behind Appolonia and knocks her out as Jackie open fires on Angelus. Meanwhile, Wenders goes to check on Sonatine. Wenders questions Sonatine why did he do all this and the latter reveals that Angelus would have wasted all her energy on him and then in the weakened form, Sonatine would have killed her.

Jackie uses the opportunity to free Frankie and puts him inside a protective cacoon made out of Darkness. After the battle, Jackie takes Frankie to a hospital.

At the hospital Frankie scream at his goons for not able to set up their operation in Gotham City because of Batman. Jackie then comes over and they talk about the recent events, including Lauren becoming Angelus and the fight in Golden Fleece casino.

Jackie confronts Frankie for keeping existence of his sister from him. Frankie tries to dodge and even lie, saying that that Jackie's sister was to pure and innocent for their world. Jackie doesn't believe him and Frankie reveals he this so he would have complete control on him. He then sends Jackie to Gotham.

Frankie decided to expand his organization into Gotham and send Jackie to kill possible competitors of his. This proves to be harder that he anticipates as Batman and Gotham's infamous villains like Two-Face ruin their plans. On top of that Frankie is robbed by the Catwoman. Frankie tries to hire Killer Croc to kill Batman, but Jackie convinces him that he can do it by himself. Unfortunately, Jackie fails to kill Batman and Frankie decides to send him away.

When Jackie decides to gives himself in to the Gotham police Commissioner Gordon for the committed murders in the city, Frankie mistakenly thinks that he there to rat him out. Frankie attacks the precinct in order to kill Jackie and Jenny. He manages to confront Jenny on the precincts rooftop and tries to shoot her, but is stopped by Batman. Jackie then attacks Batman out of the shadows and the two fight, while Frankie takes Jenny as a hostage. Batman then shines bright light at Jackie and attacks Frankie, making him to push Jenny off the rooftop. With the help of Jackie's Darklings, Batman manages to catch Jenny.

For attacking the precinct, Frankie is arrested and extradited to New York were authorities unseal several warrants on him. Because of Frankie trying to kill Jenny, Jackie decides to turn State's Evidence against him.

Frankie met with his lawyer at the prison. The lawyer explained that his situation is dire if Jackie Estacado testifies against him. Frankie calms the lawyer down, saying that he has something on Jackie and because of that he won't testify against him.

In the end Sonatine frees Frankie from the prison and offers partnership, much to the latter's confusion.

After leaving prison, Frankie tracks down Jenny and films killing her. He then sends the video tape of the act to Jackie.

Few days later, Jackie meets with Uncle Frankie and his henchmen in the abandoned warehouse. Frankie questions his motives for betraying him, while Jackie says he did it because "he was a scumbag". Jackie then asks for a cigarette, revealing that the warehouse is full of spilled gasoline. He drops the lighter in the gasoline setting on fire the entire building and killing everyone in it, including him.

Frankie portrayed himself as a gentlemen and a businessman. He was in fact murderous monster who would kill and torture without hesitation or guilt. He was also somewhat of an incestuous pedophile and would make semi-sexual advances on his own daughter. He tortured and murdered his wife's lover with a blow torch all for her affair with him and forced her to watch, simply to show her how much he "loved" her. He later did the same with Jenny Romano to take revenge on Jackie for betraying him. 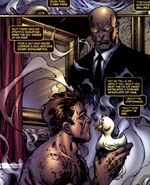 Frankie in the hospital. 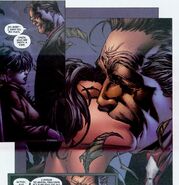 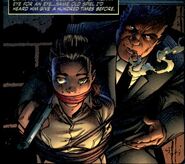 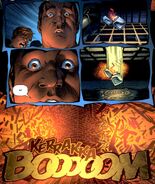 Frankie's death.
Add a photo to this gallery
Retrieved from "https://thedarkness.fandom.com/wiki/Frankie_Franchetti?oldid=19518"
Community content is available under CC-BY-SA unless otherwise noted.