"I am Eva, daughter of Dracula. I am the light that will cleanse this world of evil."

The huntress Eva is a notorious figure in the occult underworld. Known as the Daughter of Dracula to those who know her origin, Eva Tepes is the only child of Vlad the Impaler and his wife; born after her mother committed suicide and kept alive by her father and the demon Belial.

Having been born of death and with the blood of Dracula strong within her veins, Eva is a dhampir; exhibiting the strength and immortality of a vampire, but with no bloodlust  - save for her sensitivity to corrupt influences and the ominous presence of both her father and Belial.

Attack on the Subway Edit

One day in the subway, Eva comes across a werewolf about to kill a girl on a train. As he transforms into a werewolf, Eva comes out of the shadow, ordering him to leave the girl alone. Eva notes, that the man must be a new blood and this is his first full moon. The new blood werewolf doesn't see Eva threatening and views her instead just as another meal. Eva then proceeds to jump-kick the new blood out of the train.

Eva throws a silver blade at the werewolf, incapacitating him in the process. Eva tells the new blood, that she's been hunting her kind for centuries and yet it still gives her the same pleasure each time one of them dies. As last resort to save his life, the werewolf offers information in exchange of his life, speaking about some kind ritual to be performed by a vampire, that will change everything. Eva gets curious and orders him to give this information to her. After telling about the ritual and the location where it will be performed, Eva decides to let him go, this time.

This information leads her to a warehouse where The Brotherhood of Darkness is gathering to perform some kind of ritual. She also senses an ancient vampire inside, whose power is almost gone and he's desperately grasps the strength of another. Eva is adamant that she will end them all tonight. Eva then breaks into the warehouse and announces her presence to the Brotherhood. She quickly takes out two of the brothers with the rest of them, recognising her as the daughter of Dracula. The brothers are desperate to hold her back, so their leader could finish the ritual. They aren't successful and Eva breaks into the room, where the ritual is being performed. To her shock, she finds Count Orlok behind all of this.

Although noticing Eva's presence, Orlok continues his ritual. He then summons the Darkness and unleashes it on Eva. But before the Darklings can reach her, Eva shoots a wooden bolt through Orlok's heart, killing him. With Orlok dead and the ritual stopped, Eva approaches a surviving member of the Brotherhood. She questions him what kind of demon Orlok was trying to summon. The brother reveals, that it was the Darkness. Eva then proceeds to interrogate the brother about the Darkness wanting to find out more about it. After learning about the Darkness and Jackie from a surviving Brotherhood monk, Orlok's texts, newspapers and police files, she makes her way to find and kill him.

She then comes across a female she-wolf and proceeds to attack her. Wanting to hide from Eva, she hides inside a bar full of monsters. Eva enters the bar, confirming the werewolfs claims that she will kill them all. Sure enough, everyone in the bar attacks Eva, but she has no problem in cutting them all down. Jackie tries to help her out, but Eva rejects his help, saying that he should leave now. Estacado listens to Eva and leaves the bar as she continues killing anyone in her path. Eva finishes off killing the last bar residents. She then notices Jimmy, who recovers from his wound to the head. Concerned, Jimmy asks Eva if Jackie made it out alive. Eva reassures him, that Jackie was alive when he left here. Jimmy is thankful, that Estacado is alive. Eva then realises, that the mortal in the bar, that she let to leave was non other than Jackie Estacado himself. With this revelation on her mind, she kills Jimmy with a makeshift wooden shift.

Eva then tracks down Jackie to his apartment and prepares to kill him. Jackie recognises Eva as the girl he saw at the bar last night. Eva tells him, that if she knew who Jackie was she wouldn't have let him go and would have killed him just like Orlok. Jackie is confused as to who Orlok is and Eva only explains, that he's already burning in the fires of Hell for all of eternity, like he will, in a few moments. Eva knows who Jackie truly is, making Jackie to ask what does she think he is. She answers, that she studied papers at Orlok's lair, which spoke of a businessman, rumored to be a cold hearted killer and incredibly ancient demon curse, which protects its carrier as an adder guards her nest. Eva has fought Jackie's demon before and now she will defeat them at their source. If not for Jimmy revealing his identity, Jackie might have lived longer.

This makes Jackie to ask if she killed Jimmy. Eva confirms this, adding that a bullet to the head only slows vampires down, but only a stake through a heart can kill them. A telephone then rings, prompting Jackie to ask Eva to answer it, otherwise his men will come looking for him. Eva tells to Jackie, that by the time anyone arrives, she will be gone and he will be dead.

Jackie is curious as to when did Eva fought his demon before. Eva explains, that it was when he came to aid Orlok last night. Tired of talking, Eva attacks Jackie. Jackie quickly realises, that she's too fast for him and without the help of the Darkness, he's a dead man. Seeing no other choice, he grabs a remote and lowers down the window shutters. He then releases the Darkness. Out of the Darkness, Count Orlok emerges and lunges at Eva, while the Darklings surround Jackie, worried about their masters health.

Not matter how hard Jackie tries, he can't control the Darkness. Once again, Eva defeats Orlok by cutting him in half. With this strategy not working, Jackie tries to reach for the remote to the shutters, but Eva destroys it. The Darklings then attack Eva, while Jackie and three other Darklings, try to open the shutters by hand. Even with the Darklings on her, Eva manages to reach Jackie, but before she can stab him, he shoots her with a Darkness bullet. As the bullet goes clean through Eva's shoulder, the Darkness is sucked into her wound. Eva then lays on the floor, praying, as the Darkness goes into her body. She then gets up and jumps through the window, onto the nearby building roof top. As she lands on her feet, Eva glares back at Jackie with anger.

Getting Rid of the Darkness Edit

She flees to an abandoned church where she tries to discover a means to free herself from the Darkness, all the while the Darklings are tempting her to join them. When Jackie tracks her down, she knocks him out and kills Barzini with the help of the Darkness. Eva then takes Jackie into the church and ties him to a chair. When Jackie wakes up, he finds himself inside the church, tied up to the chair. Eva asks Jackie to lift the curse of the Darkness from her and in return, she will spare his life this night. This confirms Jackie's suspicions, that Eva doesn't know what's going on either. Although he wishes to help her, Jackie doesn't have any clue what Orlok did to him. The only thing he knows for sure is that if Eva kills him, she will never be rid of it.

Eva tells Jackie, that she has learned of Orlok's evil scheme from his documents. He sought to steal Jackie's power from him. When Eva rid the world of his presence, she interrupted the ritual. And so, when Jackie tried to unleash his Darklings, he found them still bound to Orlok. Because of this, they acted regardless of his will. Eva also adds, that the Darklings have been whispering to her, trying to tempt her with their power. Jackie is more than willing to help, but tells her, that it will take time to work this out. Eva doesn't believe him, thinking he's lying to her. As last resort to get rid herself of the Darkness, Eva jumps out of the church window. Jackie tries to catch her, but fails and she is impaled on a statue of angel.

Eva finds herself in Judecca, the ninth circle of Hell. Belial taunts Eva, saying that suicide is a sin and that she has been working for him all this time. Eva is reluctant to believe him, but he points, that it was he who brought her into this world and took care of. And once Eva kills her father, it will be for him, that she shall strike the blow. Eva answers, that the deed has not be done yet and Belial can't hold her here and break the bargain. She adds, that unlike Belial, who is God's prisoner, Eva is his servant. Eva then wakes up as Jackie leaves the church.

Raised by monks to be an instrument of light, Eva was indoctrinated with a seething hatred of all things evil. Vampires, werewolves, witches, and demons are all but agents of the Devil, while the humans who serve them are merely misguided fools destined to burn in Hell with them.

Living a secluded life, Eva knows little of the full nature of the world beyond the belief that all things are under God's domain and thus all evil is doomed to fail. This indignation is rooted in her hatred of her father as well as her own dark nature and the loss of her mother.

Eva kicking out a werewolf out of the train. 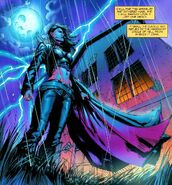 Eva coming across the warehouse, where the Brotherhood are performing their ritual. 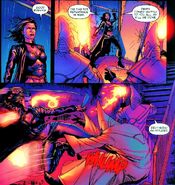 Eva fighting members of the Brotherhood of the Darkness. 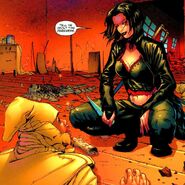 Eva interrogating a member of the Brotherhood of the Darkness.

Eva being surrounded by the Darklings. 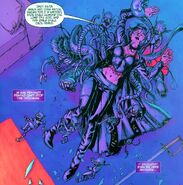 Eva being possessed by the Darkness. 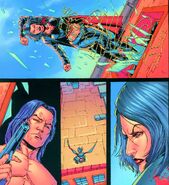 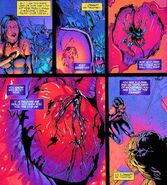 The Darkness trying to corrupt Eva. 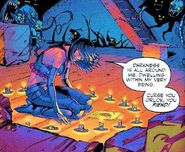 Eva trying to find a way to get rid herself of the Darkness. 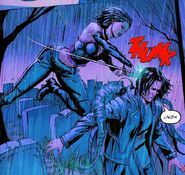 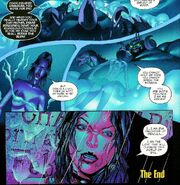 Eva bringing herself back to life.
Add a photo to this gallery
Retrieved from "https://thedarkness.fandom.com/wiki/Eva?oldid=19490"
Community content is available under CC-BY-SA unless otherwise noted.