"War is not amusing, even when it's sold hard. It's insane and stupid, and I am great at it."

Estacado was the leader of Visigoth tribe and the host of the Darkness in 410. He led his tribe against the Roman Empire once they invaded their lands.

After his twenty-first birthday, Estacado became the wielder of the Darkness. At some point, he led his tribe against Roman Empires Legion, which invaded their lands. During their battles, Estacado is killed two times by the Roman soldiers, each time being brought back by the Darkness.

After the second death, Estacado wakes up in a mass grave with a spear, punctured through his chest. As the sun sets, Estacado heals his wounds and leaves the mass grave. In the woods, he comes across two Roman soldiers. One of the soldiers jokes about raping woman with the other finding it distasteful. Before the first soldier can call his companion a faggot, Estacado sneaks up on him and rips his head off, much the horror of the second soldier. Estacado then proceeds to walk into the Roman camp and enter the Legatus tent. After seeing Estacado alive, Legatus figures that his soldiers killed his two twin brothers instead of him resurrecting himself like his soldiers started to believe in.

Legatus finds Estacado's chief actions to be desperate, believing that he was sent here to scare them into surrendering after they already killed his two brothers. Estacado tells the Roman army leader, that he doesn't want any bloodshed. Legatus finds him hard to believe as he killed four of his men in the past five minutes just to get to him. Estacado corrects him, saying that he only killed three and let one go. He then gives him a proposition, leave now and they won't kill them all.

After taking some time to consider his words, Legatus sends his soldiers out of his tent, so he could have one on one talk with Estacado. Legatus reveals to Estacado, that both this Legion and the entire Roman Empire is doomed and their future is not theirs anymore. He then expresses, that even if they leave these lands, they heads will roll for this action. And that's if they make it back as there are a lot worse tribes than his out there. With neither of them backing down, Legatus orders his men to let Estacado go.

Battle with The Legion Edit

Estacado then makes its way to his tribe, which is already waiting for him. As the Legion approaches the barbarians, the men of the tribe, set on fire decapitated Roman soldiers heads and launch at their former comrades. The two armies then proceed to clash. Both Legatus and Estacado rip through their opposition, leaving only corpses behind. One of the Roman soldiers manages to sneak up on Estacado and pins him to the ground, preparing to kill him. But Estacado gouges his eye out, giving him an upper hand and then strangling him to death. Legatus then approaches Estacado and the two proceed to fight. Although Estacado fights bravely, Legatus outmatches him with his expertise in sword fighting. As he raises his sword to kill Estacado, Legatus is shot through his eye with an arrow by a barbarian boy. He then collapses and dies.

With the Legion defeated, the barbarians proceed to take war trophies as Estacado inspects Legatus map of the lands. One of the Roman soldiers pleads for help, but Estacado dismisses him, saying that he has a sword stuck through his heart and will soon die. His tribesmen then ask what will they do now. Estacado answers by asking if he ever been to Rome. He then gets on his horse and prepares his tribe for the journey to Rome.

Although a ruthless killer by nature, Estacado was a reasonable person and when given a chance, tried to avoid battle. Even though, Estacado was killed two times by the Roman soldiers, he was willing to offer Legatus a chance to leave their lands and keep their lives.

Estacado looking at his tribe. 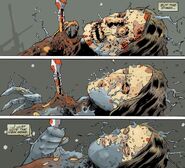 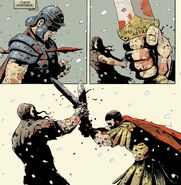 Estacado looking at the map of Rome. 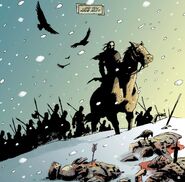 Estacado leading his army to Rome.
Add a photo to this gallery
Retrieved from "https://thedarkness.fandom.com/wiki/Estacado?oldid=18863"
Community content is available under CC-BY-SA unless otherwise noted.