"Ernie's got it all down pat: the guns and the duds... he even gets a few small jobs courtesy of the boys back home. In short, he's pretty much a carbon copy of the old man. Except that he's a fucking idiot."

Ernie Palanco is a mobster appearing in The Darkness comics series.

Ernie Palanco was grandson of Tony Palanco, a notorious mobster who worked with gangsters like Al Capone and Lucky Luciano. Ernie looked up to his grandpa and decided to emulate him by becoming a hitman. When Jackie Estacado takes control of Franchetti Mafia, Ernie manages to kill three wrong targets.

After getting the location of the target from Mickey Floresca, Palanco and his henchman open fire on Jimmy The Grape, before escaping in a car. After they escape, its revealed that they killed the wrong guy and not Jimmy.

After accomplishing the hit, Palanco goes to a local club. There he's met by Jackie. When he reveals his identity to Palanco, the former accidentally spits out his drink on Jackie. Later that night, Jackie sends Palanco on various suicidal errands in order to kill him, but he survives every encounter.

The next day Palanco is sent to Municipal park public toilet to deal with child molesters. As he enters the toilet, Palanco sees a blue goldfish fly into one of the toilets. In joy, he quickly runs after it and dives his head into the water. As he does that a giant explosion goes off, destroying the entire toilet cabin. As Jackie lights up his cigarette, Palaco suddenly appears, asking what happened here. Jackie yells at Palanco for killing the wrong guys, when the former reveals that Mickey was the one who gave him the street address.

After finding out about this as a punishment to Floresca, Jackie puts Palanco as Mickey's new bodyguard.

Ernie was infamously among mobster for being extremely stupid and naive. He looked up his grandpa and wanted to be famous in the gangster world as he. Unfortunately, Ernie had trouble of being a hitman, managing to kill three wrong hits. In his childhood he was known to be bullied by other children. Ernie also had fondness for blue goldfishes.

Ernie bullied as a child

Ernie in the car 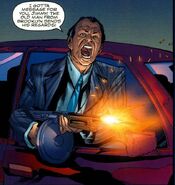 Ernie at a bar

Ernie running after a blue goldfish

Ernie becoming Mickey Floresca's bodyguard
Add a photo to this gallery
Retrieved from "https://thedarkness.fandom.com/wiki/Ernie_Palanco?oldid=15139"
Community content is available under CC-BY-SA unless otherwise noted.