"Sometimes I am afraid she is lying. But Emma never lied to me."

Emma Cayce was the daughter of oil rigger Martin Cayce and the secret fiance of Adelmo Estacado.

At some point, Emma moved to California, together with his father to exploit vast amount of oil fields in the area. She then met Adelmo and fell in love with him.

On Sunday, as usual, Adelmo meets up with Emma behind their garden. Emma comments, that Adelmo smells like oil and sweat and she likes it. Adelmo tells her about what her father told him regarding poetry. After hearing this, Emma promises to bring him a book the next day written by a man named Rimbalid.

Running Away Together Edit

The next day, Emma took the book and went to Adelmo's home. As she reaches it, she's shocked to see the house on fire and Adelmo kneeling over his dead stepfather's corpse. Adelmo then stands up, kisses her and the two run away. Emma suggests that they could go and stay with her strange uncle, Edgar. About ten miles away, they discover a barn and decide to rest there. The two then have sex and as Adelmo impregnates Emma, he dies. Nine months later, while giving birth to their baby boy, Emma takes her last breath too.

Emma unconditionally loved Adelmo, seeing only the good in him. Even after witnessing Adelmo killing his stepfather, Emma was willing to run away with him, if it meant they be together forever. 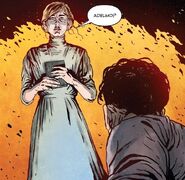 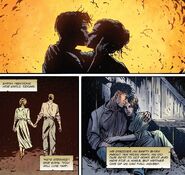 Emma running away with Adelmo.
Add a photo to this gallery
Retrieved from "https://thedarkness.fandom.com/wiki/Emma_Cayce?oldid=19675"
Community content is available under CC-BY-SA unless otherwise noted.