The Ember Stone is one of The Thirteen Artifacts. It is a force of fire and creation, the enemy and opposite of The Glacier Stone. 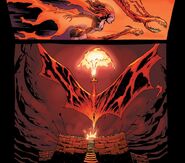 Ember Stone wielder transforming into a dragon.
Add a photo to this gallery
Retrieved from "https://thedarkness.fandom.com/wiki/Ember_Stone?oldid=19355"
Community content is available under CC-BY-SA unless otherwise noted.