Duke Ross III was a tyrannical ruler of Gastonia.

Once, Duke Ross III came to a tavern where he met the Old Man. He tells the Duke that a great evil is overtaking the land. Demons visit the land who kill the livestock and destroy their lands. Then their leader comes who can infiltrate even the most fortified cities and level them with his incredibly powerful evil magic. Before Old man can finish talking, the Duke punches him for scaring the folk in the tavern. He then decides to investigate if this talks are true.

The Duke with his men go to nearby farm that was attacked. A farmer tells that the attacker has ran to the woods. With this lead, the Duke and his men go to the forest. They find a Darkling to be the culprit behind the killed livestock.

The Duke puts the Darkling into a cage and shows it around the streets of Gastonia, jokingly calling it the Scourge of Gastonia. The Duke then asks the Old Man is this the monster who will destroy his kingdom to which the latter answers that it will be his master who will do it. The Darkling then confirms that he's master in on his way. The Duke and his men begin to laugh thinking he's joking.

Later that night the Darkness host, attacks Gastonia, killing everyone and everything in his path. The Duke blames everything on the Old Man, while the latter says that if the Duke didn't disregarded his people and acted like tyrant, this wouldn't have happened. The Duke is then confronted by the True Evil. It asks the Duke if he knows the names of anyone in his kingdom. Duke can't answer and the True Evil rips off his head.

Duke Ross III is a tyrannical ruler of Gastonia. His greed and callousness was outweighed only by his incredible narcissism. The Duke disregarded his subjects and let himself do anything he wished to them. For example, he grouped a maiden who walked pass him and punched an old man.

The Duke would often spread fear of him among his subject and liked to threaten those who disrespected him. 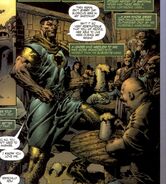 The Duke in the tavern.

The Duke grouping a maid. 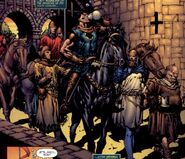 The Duke decapitated by the True Evil.
Add a photo to this gallery
Retrieved from "https://thedarkness.fandom.com/wiki/Duke_Ross_III?oldid=20515"
Community content is available under CC-BY-SA unless otherwise noted.