Dominic Alberto also known as The Quite Don is a mafia don appearing in The Darkness comics series.

At his youth, Dominic worked with infamous gangster like, Lucky Luciano where he quickly gained attention. He later conceived Junior.

Don Alberto in retaliation of Jackie ratting out the mobsters, puts a million dollar bounty to whoever manages to kill him.

Eventually, Jackie tracks down the Don and attacks his house. Jackie manages to kill most of his men and then shoots the Don into the head with a gun made of Darkness.

Return from the Dead Edit

As doctors turn off the life support, Don Alberto suddenly awakens with completely black eyes. Doctors and Junior are shocked, while Don questions who are they looking at.

The next day, Don Alberto calls the family for a meeting. Instead of seeing his old crew, he sees old mobsters like, Al Capone in their places. Suddenly, a hitman send by Jackie, shoots at Don Alberto only for him to come back as if nothing happened. He then slashes open the hitman's neck with a knife, letting him bleed to death. Alberto then slaps his son and orders him to not come back until Jackie is dead.

Later, Don Alberto visits morgue and kills a doctor. He brings back the three of his henchmen that were shot with darkness bullets by Jackie - Nunzio, Benny and Tonsils.

Don visits "Little" Joey Delfini's daughters wedding, were together with his crew, he kills everyone.

After finding out about Delfini's death, Jackie confronts, the Don and his henchmen. After expressing his surprise of seeing Nunz and his friends to be alive, he open fires on them with darkness guns. Don Alberto reveals that they came back from the dead because of the darkness bullets shot at them. The bullets once inside of them, started to grow and turn them invincible. Jackie then unleashes his darklings, but Don Alberto and his henchmen quickly rip them apart. He then envelops with his darkness armour, but by using darkness bullets taken from his henchmen, Don Alberto dissolves the armour. Powerless Jackie is then beat up by the henchmen.

Out of sudden, Don Alberto sees Jackie as Lucky Luciano, his former boss. He helps him to stand up and Jackie goes along, saying that Alberto should make his move onto Vegas. The henchmen try to convince Don that Jackie isn't who he says is, but Don doesn't listen to them and leaves to Vegas.

Dominic was incredibly sadistic, ruthless criminal, controlling his criminal organization with an iron fist. He was always looking for ways to gain more power. Dominic had a grudge against Jackie, for trying to kill him. Because of the bullet in his head, he would hallucinate his crew and people around him as old infamous gangsters. 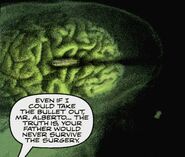 The bullet in Don Alberto brain 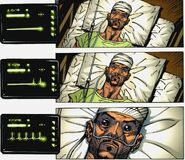 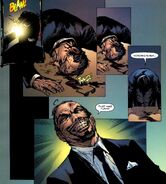 Don Alberto getting up after being shot

Don Alberto ripping in half a darkling

Don Alberto hallucinating Jackie as Lucky Luciano
Add a photo to this gallery
Retrieved from "https://thedarkness.fandom.com/wiki/Dominic_Alberto?oldid=19522"
Community content is available under CC-BY-SA unless otherwise noted.