"As ever, mortals will be caught in between and I fear the consequences."

Doctor Strange is the Sorcerer Supreme of Earth. Trained by the Ancient One, Dr. Stephen Strange is one of a monastic order of sorcerers dedicated both to guarding and maintaining the Nexis - the balancing matrix which holds the tapestry of alternate planes of existence together.

Doctor Strange finds disturbance in supernatural world. There is an imbalance that portend great conflict, but he can't exactly who or what is causing it. The Doctor expresses his fear of consequences this conflict will bring to mortal world to Wong.

During the two way battle between Jackie Estacado, Danielle Baptiste and Ghost Rider, Hulk, Doctor Strange steps in and suspends both his former allies. He then proceeds to erase Hulks and Ghost Riders memory of their encounter with Jackie and Daniele, and sends them away. Doctor warns both Jackie and Daniele that a war is coming in which they both will be involved. He then proceeds to disappear.

Stephen was originally arrogant and selfish yet charming.

After his encounter with the ancient one, he became a humble and compassionate yet sometimes flamboyant person. He's even willing to sacrifice himself to save the world. 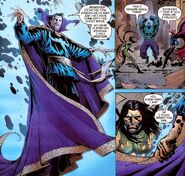 Doctor Strange disappearing
Add a photo to this gallery
Retrieved from "https://thedarkness.fandom.com/wiki/Doctor_Strange?oldid=17898"
Community content is available under CC-BY-SA unless otherwise noted.