"Our sick washes over the streets like a low fog, passing from mouth to mouth with every breath."

– The Darkness describing its virus. [src]

The Darkness Virus is special supernatural virus created by the Darkness, appearing in The Darkness comics series.

Created by the Darkness itself, the virus was first used in the city of Omaha by Capris Castiglione. At first she let various homeless people drink her blood, infecting them in the process. The infected then spread through the city, vomiting Darkness bugs that proceeded to infect anyone else that came into contact with them.

Over just one night, the virus infects everyone in the city. After Jackie Estacado kills Capris, the virus disappears and everyone infected with it, die.

The virus returned again after the Darkness created the Doppelganger, although heavily modified. The Doppelganger used the virus to infect Jackie's new team and his employees.

The Capris iteration of the virus was first spread by letting numerous homeless people drink her blood. After ingesting the blood, the infected pupils would become completely black, while their skin turn pale. The infected would then go deeper into the city and be docile until non-infected approaches them. Once approached, the infected would vomit bugs that would immediately seek to enter a host.

After entering the body, the new host would begin to bleed from their eyes and mouth. Over the span of few seconds, the host becomes completely infected with his eyes glowing red. He then rises and joins with other infected to spread the virus. This makes the virus extremely dangerous in highly populated areas. In the case of Omaha, its complete populace (estimated to be over 400 000 individuals) were infected over one night.

The infected are completely under control of the Darkness or its emissaries like Capris or Jackie's Clone. Donnie - a member of National Guard, described the infected to be similar to undead zombies as they roam in large herds, lack any of their former intelligence and even physically look like ones.

Although lacking in strength, the infected can quickly overcome even Jackie himself with their large numbers. They can also be fused into a giant mass of flesh and used for both offense and defense, as shown by Jackie's Clone. Interestingly enough, the infected are immune to sunlight.

Once the Darkness created the Doppelganger, he used an improved iteration of the virus. Instead of infecting people through blood, the Doppelganger could spread the virus by putting his hand over someone's head. Out of his hand, Darkness tendrils would emerge, which would proceed to infect the individual. The infected then would go and spread the infection in the same manner.

Differently from the Capris version, the infected would retain their intelligence, but be completely under control of the Doppelganger. He could also see and hear through each infected. After Jackie regains the Darkness, he retains this ability. The only physical difference the infected gain from this iteration is black pupils, that leak black liquid down their face and pale, cold skin. 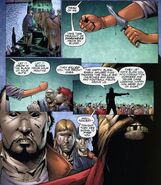 Capris infecting people with the virus.

A police officer being infecting.

The police officer infected.
Add a photo to this gallery

The Doppelganger preparing to infect his victim.

An infected spreading the virus. 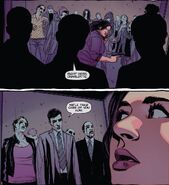 The new infected.
Add a photo to this gallery
Retrieved from "https://thedarkness.fandom.com/wiki/Darkness_Virus?oldid=16944"
Community content is available under CC-BY-SA unless otherwise noted.