"You looked at it too long you felt your head, heart and stomach turn to icy water."

The Darkness Foot-Creature is unique Darkling appearing in Tales of The Darkness: Issue 1.

The Darkness Foot-Creature is a giant arachnid -like looking darkling that serves the Dark Prince. The creature is at least five times bigger than a normal human. It has four main legs for walking, two sharp blade-like protrusions on his back and two smaller hands in the front. It's described as extremely terrifying to look at.

The story opens up with Sela the first officer of deep space cargo freighter Runners Gold boarding with a Darkness vessel. A Darkness foot-creature, which presence terrifies her. The captain of the freighter Fincher lets the creature to look a the offering they have to the Dark Prince so they could be given a safe passage through the system. Instead the creature goes deeper into the freighter much to Fincher's objections.

The creature coming aboard Runners Gold 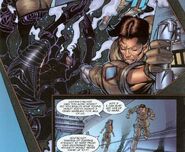 Captain Fincher flushing the creature into space
Add a photo to this gallery
Retrieved from "https://thedarkness.fandom.com/wiki/Darkness_Foot-Creature?oldid=18400"
Community content is available under CC-BY-SA unless otherwise noted.