The Darkness Exoskeleton was a special contraption created by Professor Kirchner in order to take over the Realm of the Darkness. It was later possessed by the Heart of Darkness, who use it to battle Jackie Estacado.

When Jackie Estacado reached the Realm of the Darkness and met with Danny, the Heart of Darkness took over the exoskeleton. The Heart is furious that Kirchner is trying to steal its power for himself, but is also impressed by the professors mind. Instead of killing him, the Heart decides to possess Kirchner and use his mind to help it kill Jackie.

With his dying breath, Danny urges Jackie to kill the Darkness once and for all. Jackie then pulls out the Sun Dagger from his chest and confronts the Darkness exoskeleton. He manages to defeat the creature, which opens a portal right to the Heart of Darkness.

Made entirely out of Darkness, the exoskeleton didn't needed to rely on any modern human technical limitations. The exoskeleton possessed immense strength and durability, able to lift and then proceed to slowly crush empowered Jackie with just one arm. Except for its human victim, the exoskeleton was completely impervious to damage.

Although created by Kirchner, the exoskeleton could easily be taken over by the Darkness. It was also able to possess Kirchner himself and gain access to his mind. With Kirchner mind at its disposal, the exoskeleton could create weapons and powers, while being in the middle of the battle. It could also copy Jackie's powers and then amplify them for more damage.

The Darkness taking over the exoskeleton and then Kirchner himself. 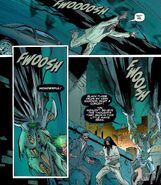 Exoskeleton shooting black flames made out of Darkness. 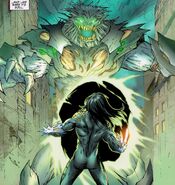 Exoskeleton defeated.
Add a photo to this gallery
Retrieved from "https://thedarkness.fandom.com/wiki/Darkness_Exoskeleton?oldid=18423"
Community content is available under CC-BY-SA unless otherwise noted.