"Don't use this until you have nothing left."

– Aram to Jackie, regarding the gauntlet. [src]

The Crystallized Gauntlet was created after Alkonost's tear drop on Jackie's arm, moved by the mercy Estacado showed to her. Once the tear touched Jackie's arm, it started to crystallize. After Jackie kills Arvo, he leaves behind the gauntlet. Some time later, Aram comes and takes the gauntlet.

War with The Darkness Edit

Aram then brought the gauntlet to Omaha, where he gave it to Jackie. He warns Jackie to use this weapon only as his last resort. After Aram cancels out the Darkness, Jackie uses the gauntlet to drive his crystallized arm through her sister's, Capris Castiglione chest, instantly killing her. In the aftermath of this act, the gauntlet crumbles apart.

Although the exact abilities of the Crystallized Gauntlet are never revealed, the gauntlet is extremely sharp and strong, which helped Jackie to pierce through his entire arm through Capris abdomen even after losing all his supernatural strength. 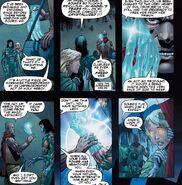 Jackie using the gauntlet to kill Capris.
Add a photo to this gallery
Retrieved from "https://thedarkness.fandom.com/wiki/Crystallized_Gauntlet?oldid=16881"
Community content is available under CC-BY-SA unless otherwise noted.