"I once imagined, I too would control the Darkness."

– The Crucified to Jackie. [src]

The Crucified is a side character appearing in The Darkness.

Centuries ago, before the dawn of history, a Darkness host found a precious item that helped bring the Darkness under control. Centuries later, the Crucified fashioned the guns to harness its power into a weapon. At some point, the Darkness host passes away and gets crucified and trapped in the Otherworld.

Many centuries later, Jackie Estacado came across the Crucified in the Hills. After telling the word that represent hope for Jackie (Jenny), the Crucified gave his Darkness Guns to him, that have been modified over the years. The Crucified then warns Jackie to use the guns wisely, or the Darkness will consume his soul. 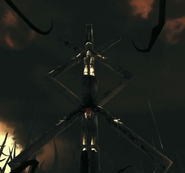 Jackie telling his word for hope to the Crucified.

Alternate form.
Add a photo to this gallery
Retrieved from "https://thedarkness.fandom.com/wiki/Crucified?oldid=17969"
Community content is available under CC-BY-SA unless otherwise noted.